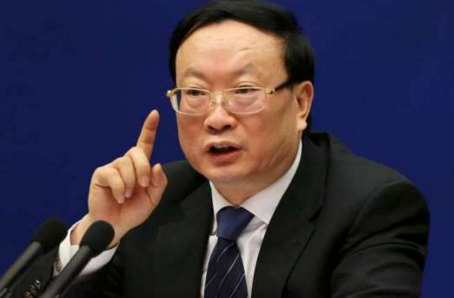 As Xi Jinping’s corruption crackdown continues apace, the latest high-profile target is Wang Bao’an, director of the National Bureau of Statistics. Just hours after Wang delivered a press conference on the state of the Chinese economy, the Central Commission on Discipline Inspection announced that he is under investigation for “serious violations of party discipline,” which usually refers to corruption. From Charles Riley at CNN:

The surprise announcement, which is bound to raise new questions about the accuracy of Beijing’s economic statistics, came just hours after Wang briefed reporters on the state of China’s economy.

China’s economic statistics have come under fire in recent years from analysts and economists who say they are artificially inflated. Some are convinced that China is outright cooking its books. Others debate the accuracy of certain data and point to more meaningful alternatives like electricity consumption or rail freight.

In the past, criticism of GDP calculations was mostly tied to “GDP worship.” One way for officials to get a promotion, be it at the village or provincial level, was to hit — or exceed — growth targets, and then send the good news along to Beijing.

Many attempts to parse China’s growth rates take inspiration from the nation’s top economic official, Premier Li Keqiang, who as a provincial governor in Liaoning was quoted in a leaked U.S. diplomatic cable saying that China’s GDP numbers were “man-made” and therefore unreliable. Mr. Li recommended looking at three indices—electricity consumption, rail cargo volume, and the volume of loans disbursed – for a more accurate picture. This and subsequent variations became known as the “Keqiang I”

In December, state media said that “water injection” — a Chinese phrase for cooking the books – by local officials in the northeast rustbelt provinces of Liaoning, Heilongjiang, and Jilin – had distorted investment and growth figures for years, without providing details.

The National Statistics Bureau did not reply to a request for comment. In a news briefing last week after China’s 2015 growth figure was released, the agency’s head Wang Baoan told reporters that China’s economic data was “valid and reliable” and its methodology in line with “global standards.”
[Source]

Wang, 52, was appointed chief of the statistics bureau last April after serving 24 years in the Ministry of Finance.

Chinese anti-graft investigators can spend years assembling a case, suggesting accusations against Wang might stem from his previous post instead of his short tenure at the statistics agency.

Chinese regulators have wide discretion in making decisions that can affect billions of dollars in business.

The anti-graft committee reported this month some 282,000 officials were punished last year for rule violations. It said the anti-corruption crackdown would continue this year with “intensity and pace unchanged.” [Source]

[Wang] said that last year 200,000 party members received light punishment, while 82,000 faced severe punishment. In many cases the term “discipline violation” indicates a suspicion of corruption but can also refer to breaking other rules, from living extravagantly to exhibiting laziness on the job.

People’s Daily, the party’s mouthpiece publication, backed Mr. Wang’s pledge in a commentary on Monday that says sustaining the campaign is essential if China wants to develop. “A big tree will eventually wilt if it is exposed for insects to bite,” it said.

Several top officials at state-owned enterprises have been detained and investigated as part of the CCDI’s new focus on economic corruption.

At ChinaFile, a new interactive database aims to track the anti-corruption campaign by providing information on all publicly reported cases and allowing readers to sort the data on individuals by rank, stage (of legal case), location, sector, and date: