Farmers in China are waiting for land reform so that they can have greater ownership over their land. A story from the Economist: 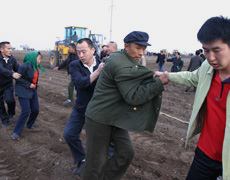 A protester is dragged away from an industrial park, the site of a 2006 land dispute. (AP/CHINA OUT)

Their main hope now appears to rest with the Communist party’s leadership. After a meeting in Beijing, the party has announced “breakthroughs” in its thinking about the countryside. A communiqué issued on October 12th by the party’s Central Committee promises “a new upsurge” in rural reform. Some believe that, at long last, the party has recognised that the key to agricultural improvement is land ownership. But such is the secretive way that policymaking works in China that it may be several days (or longer) before news trickles out of what these “breakthroughs” actually amount to. The details, for the time being, are classified.

[…] But for all the official hype about the Central Committee recent meeting—of “great, profound and far-reaching significance”, said the People’s Daily—the party remains weighed down by taboos. Two years ago it decreed that 120m hectares must be preserved as arable land to ensure food security. That leaves hardly any for conversion to other uses.

Comments to this article bring out the concerns that land reform will revert back to feudalistic landlord structure prior to 1949 and that China lacks the infrastructure to support the land reform.

60 years later, here we are facing another land reform. By comparison, if free transfer of land is really permitted, it looks like the CCP land policy is exactly unwinding back to the ROC era. You will soon see a class of landlords emerging from the rural society and many peasants will be reduced to hired agricultural workers.

Even Chinese SME’s have an extremely difficult time receiving approval for loans.In light of this fact, how can it realistically be assumed that land reform will compell chinese lending insitutions to provide funds backed by collateral (land)owned by chinese peasants or that fund exists. The land in areas which reform could hypothetically be implemented, for the most part, is of negligable comparative value to that of China’s coastal regions.

While land reform seems to be needed for Chinese farmers, there are more structural issues and questions China needs to tackle. Some general information about land reform can be found on the Land Reform page in Wikipedia.

To find out more details about what happened at the Central Committee meeting, read this earlier post in China Digital Times.