With George Bush calling a 20 country summit this November to discuss the current credit crisis, the rest of the world questions what role China will play. The Economic Times reports:

China can’t save the world from a financial meltdown, but it’s strong economic growth, even in a time of crisis, can help to alleviate the trouble for the rest of the world. While it might be “impossible” for China to help Europe, Japan or the US, China can still be a stabilizing factor in Asia.

At the upcoming Asia-Europe summit (ASEM) in Beijing this October, China will host 40 European and Asian governments. While China’s growth is declining, it is still hovering around 9.9 percent, and on Sunday, the Chinese State Council set a new economic strategy: away from “rapid growth and inflation control” and instead towards “stable and rapid economic development.” 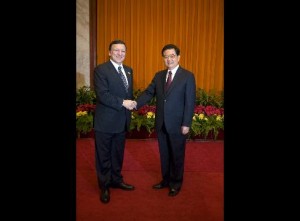 US secretary Henry Paulson sited China as a large factor contributing to the world’s economic growth, and said while “China is feeling the current global financial stress as well… its economy is expected to continue to be an important engine for global growth during this period.”

Bloomberg reports countries like Thailand, South Korea, and the Philippines will all be asking for some sort of assistance in the unstable global financial environment at the upcoming ASEM meeting in Beijing on October 24th.

China will be asked to become more involved in the global financial crisis at ASEM this week. The meeting will include China’s Hu Jintao, France’s Nicolas Sarkozy and more than 40 other heads of state.

The countries will be looking for China, who holds $1.9 trillion in currency reserves, to use this leverage to assist other struggling nations.

With the current financial crisis underway, this year’s ASEM meeting “has the potential this time to achieve something really important,’’ says Phil Deans, a professor of international affairs at Temple University in Tokyo. “If you can get the Asian and European economies singing from the same page the Americans will have to follow.”

Observers believe China will be forced to consider proposals from neighboring Asian countries seriously, because a financially destabilized region will have “more of an impact on China” than the crisis in Europe and the United States.

On November 15th, George Bush will host 20 countries, including China, at a summit in Washington D.C.