US Issues Alert Over Chinese Melamine 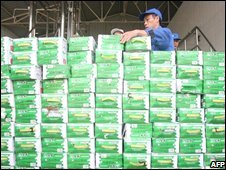 The U.S. Food and Drug Administration has issued an alert after discovering melamine and cyanuric acid in Chinese food imports:

The new alert from the US Food and Drug Administration (FDA) covers a range of Chinese products including drinks, sweets, baby and pet food.

It also allows US inspectors to seize any Chinese products suspected of being contaminated.

Any food items from China that contain milk will be stopped at the border and tested by U.S. authorities:

Companies in the United States have recalled several products, including nondairy creamer and a type of candy, which are primarily sold in Asian markets, because of melamine concerns but to date the contamination here was not thought to be widespread.

“We’re taking this action because it’s the right thing to do for the public health,” said Steven Solomon, an FDA deputy associate commissioner…

The FDA routinely blocks imports of individual food products, but it is rare for the agency to block an entire category of foods from a particular country. Last year, the FDA blocked five types of farm-raised seafood as well as vegetable protein from China because of repeated instances of contamination from unapproved animal drugs and food additives.

The Chinese government is still trying to repair domestic and international faith in Chinese food products.  Earlier this month, two milk inspectors for Mengniu, one of China’s largest dairy companies, were badly beaten during a safety check at one of their supplier’s:

“According to an initial analysis, this incident was triggered by (Li’s) [the inspector’s] decision that this truck’s milk was not in compliance,” it quoted an unnamed Mengniu official as saying.

Li and another inspector, Zhang Liwei, were set on by a group of about five club-wielding men as they left work later that day.  Li was badly beaten, suffering numerous injuries over his body, including fractured vertebra, and was in a coma for “a long time”, [the China Youth Daily] said, without specifying Li’s current condition.  Neither victim could identify the milk supplier nor the attackers as both inspectors had only recently been rotated to Tangshan.

Police were investigating, the paper said.

An op-ed in the International Herald Tribune looks at China’s melamine crisis from the perspective of American agriculture:

For all the outrage about Chinese melamine, what American consumers and government agencies have studiously failed to scrutinize is the place of melamine in America’s own food system. In casting stones, we’ve forgotten that our house has its own exposed glass.

To be sure, in China some food manufacturers deliberately added melamine to products to increase profits. Makers of baby formula, for example, watered down their product, lowering the amount of protein and nutrients, then added melamine, which is cheap and fools tests measuring protein levels.

But melamine is also integral to the material life of any industrialized society. It’s a common ingredient in cleaning products, waterproof plywood, plastic compounds, cement, ink and fire-retardant paint. Chemical plants throughout the United States produce millions of pounds of melamine a year.

See past CDT posts for more information on the Sanlu milk scandal.

[Image courtesy of the BBC.]