A visiting Chinese delegation of recruiters and representatives from more than 27 Chinese financial firms stopped in London, Chicago, and New York in an effort to upgrade their existing employee workforce by searching internationally. The current global economic crisis is allowing Chinese banks to more readily tap into potential hires. The International Herald Tribune reports:

…in a reverse miniature brain drain, Chinese financial institutions are taking advantage of the downturn and focusing on the newly unemployed to diversify and upgrade their own staffs. 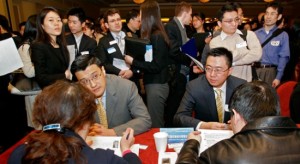 In another reversal of fortune, China, because of its closed financial sector — which Washington and the West have been insisting China open — has been largely shielded from the toxic mortgage-backed securities that brought down many of the world’s banks. Capital flows in and out of China are tightly controlled, and China’s capital markets are closed to foreign companies.

Wen Jiabao: How China Plans to Reinforce the Global Recovery

Vietnam and China in an Era of Economic Uncertainty

China to Push Ahead With ‘Go Abroad’ Policy – Ministry