China’s gross domestic product output has grown by 6.1% in the first quarter, the worst quarterly growth rate in years. From Keith Bradsher of the New York Times: 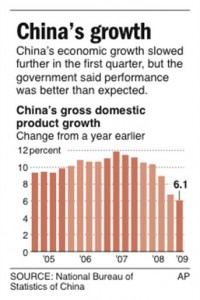 Still, 6.1 percent is substantially below the double-digit growth rates China has frequently posted this decade. China’s leaders have called for 8 percent growth just to create enough jobs for school graduates and for the tens of millions of rural migrants pouring into the country’s cities.

[…] Prime Minister Wen Jiabao said after a cabinet meeting that the condition of the economy was “better than expected” and attributed it to government stimulus measures, according to Xinhua, the official Chinese news agency.

But the cabinet, with Mr. Wen as chairman, issued a report warning against “blind optimism” on the economy. The report said the foundations for China’s recovery were not solid, citing weak overseas demand, overcapacity in some industries, job losses and lackluster investment by the private sector.
While the economy grew at its slowest pace in more than a decade in the first quarter, other indicators suggest a possible bottoming out of the slowdown that brought the country’s dazzling economic boom to a screeching halt late last year. [Image from Associated Press]

Still, the 6.1% figure may be reason for optimism. From Elaine Kurtenbach of the Associated Press:

Q: How is China’s economy doing?

A: China’s economy grew by 6.1 percent in the first three months of the year, helped by a revival in stalled industrial activity and stronger investment in factories and other infrastructure. That’s down from 6.8 percent in the previous quarter, although China’s habit of frequently revising its data makes analysis difficult.

Year-on-year comparisons of many statistics for January through March are skewed by the relatively high figures for the first quarter of last year, when the economy was growing at double-digit rates. But data for March were much better than for January and February, suggesting an upturn, says economist Mingchun Sun of Nomura Securities.

A 4 trillion yuan ($586 billion) stimulus package is boosting employment and revenues at construction companies and building materials makers thanks to a massive program to build new roads, railways and housing.