ESWN translates a Southern Metropolis Daily article in which Deng Yujiao tells what took place on the night she stabbed a local official who attempted to rape her:

Deng Guida then continued to curse: “What do you mean about working here or upstairs? Aren’t you all the same? You are a prostitute but you still want to have a good reputation.” He also said: “Don’t you want money? You have never seen any money! How much money do you want? Just say so. Would you believe if I am going to beat you to death with money today” He took out a wad of money and used it to slap Deng Yujiao in the face and shoulder. At each slap, Deng Yujiao took one step backwards until she was at the edge of the sofa. She said: “Yes, I have never seen money. If you have the guts, you can beat me to death.” Deng Guida said: “Indeed I’ll beat you to death with money. I am going to summon a truckload of money and squash you to death.”

Then Huang Dezhi and Deng Guida both rushed at her. Deng Yujiao took the knife and stabbed in front of her. Deng Guida tried to grab her with both arms. Since Deng Guida was right in front of her, she stabbed her multiple times. Deng Guida then grabbed his stomach, walked towards the door and fell down on the floor. Deng Yujiao saw a knife wound on Deng Guida’s neck, so she called 110 (police). 110 told her to call the Yeshanguan town police station. Deng Yujiao replied: “Someone is dying over at Xiongfeng. Please hurry over.” Then she called her mother and asked her to come over immeidately.

In Beijing, college students staged a work of performance art to express support for Deng Yujiao. The signs around the bound woman read, “Anyone Could Become a Deng Yujiao.” 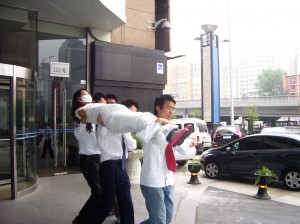 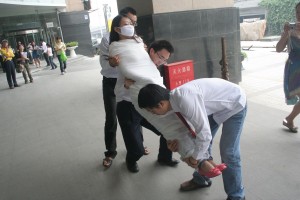 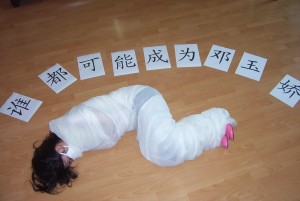 It has also been reported that 42 female college students have written a statement (倡议书) in response to Deng’s case calling on all of society to protect and respect women’s legal rights and human dignity.