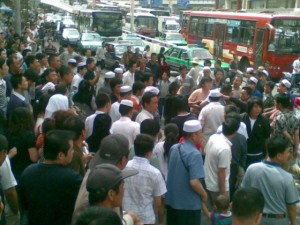 ChinaSMACK has captured a netizen’s response to vigilante justice against the abuse of “urban management” officials (chengguan 城管) in Lanzhou, a Hui Muslim dominated area: 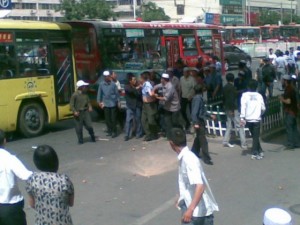 This weekend, due to the recent need to repair our house, along with my wife we went to the Xigu Porcelain Material Market, afterwards I decided with my wife to go to Xiaoxihu Shopping Center to buy some household goods. Because from Xigu to Xiaoxuhu station was still far from the shopping center, we decided to get off at Route 50 and walk to the shopping center, in front of the shopping center my wife wanted to eat some snacks like sweet bun and noodles, together we sat on the side of the street and began to eat, just as we took a few bites, the peddlers began to yell “the Chengguan are coming,” we then stood to finish our snack and pay the boss [peddler], the boss was just beginning to pack up his stand; as we gave him the money we saw the peddlers beside us were already shoving and pushing with the Chengguan. Consequently, because the number of Chengguan was fairly numerous, along with the police from the local police station showed up together. Perhaps they were emboldened by ample [numbers], the Chengguan violently enforced the law, pushed down every peddler’s stall they came upon, and fruits, snacks, and noodles were thrown across the street. Many in the crowd were angry at what they saw. Including me, many peddlers wouldn’t take it anymore. Suddenly, a couple of people went up and threw the Chengguan captain on the ground, the other Chengguan and police saw that there was too many people, and the crowds was also very angry, and they all fled far from the scene.

People saw that the Chengguan captain was captured, everybody started to pick up the things on the ground and threw them at the Chengguan, fruits were thrown everywhere, trash was flying everywhere, scenes from a movie where corrupt official were pelted with rotten eggs before their execution unfolded in reality, people cursed while beating the Chengguan.

Chengguan and peddlers will always be at odds; it is just that Chengguan have greater capacities. To tell you the truth I hate those unscrupulous peddlers, operating without permits, polluting the environment, place to attract a scene. Everything always have two sides, I maintain the middle ground!