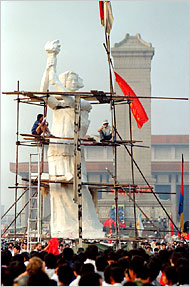 Today, reports abound of young Chinese saying they don’t know or don’t care about events in 1989. Yet all one has to do is go online to the vast number of Chinese forums and blogs to know that the spirit of Tiananmen is still alive.

With 300 million people — mostly young, urban and well-educated — online in the country, the Internet has provided Chinese citizens with an unprecedented capacity to express themselves, expose corrupt local officials and call for social justice, despite heavy government censorship.

From efforts to uncover child slave labor to protests that halted the construction of a dangerous chemical plant, netizens are demanding accountability, transparency, and political reform from their government.

Recently, artist and blogger Ai Weiwei drew international attention to the issue of bad school construction and the children killed in those schools during the Sichuan earthquake by his efforts to collect their names. He has received an outpouring of support from the online public, which is calling for systematic changes, including an end to official corruption and cover-ups.

Such “public events” are increasing day by day, and reflect a rising rights consciousness among the Chinese. In 1989, the voices of those gathered on Tiananmen Square were heard on TV screens by millions around the world. Today, millions of voices express themselves on the Internet, carrying on the demand for democratic reforms that the Tiananmen protesters called for.