Amoiist: How Did I Break the Jail?

Blogger Peter Guo (aka Amoiist, or Guo Baofeng) writes about his experiences during his recent detention: 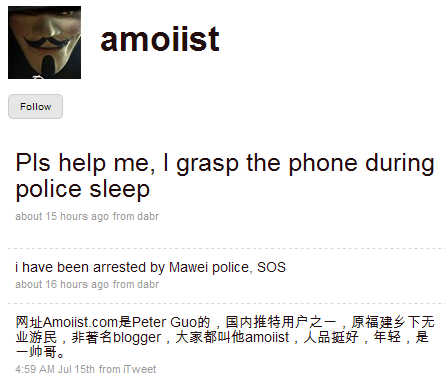 Five Mawei police (Mawei is a district of Fuzhou city) came to my company in Xiamen in the afternoon July 15, and confiscated my computer and took my cell phone away, so I was unable to contact with any of my acquaintances until they took me to the office building of Mawei Police Bureau and put my phone on the desk in front of me so that I could take this phone at any time when the police who interrogated me didn’t notice. No one knew that I was seized except my boss who is also a friend of mine. And then, they asked me to lead them to my residential place from where they took away my laptop. A police saw my iPod Touch on bedside and asked what it was. I cheated them that it was just an ordinary MP4 player rather than a memory device, so he didn’t take it away. The police never thought this small device would become a powerful weapon.

However, I successfully made the whole world know where I was hours later. It was about 5:00am of July 16 and they had interrogated for several hours, so the police were quite tired. The police sitting opposite me felt asleep and the other one sitting behind me played games on computer so engrossed that he was unable to pay attention on me. I quickly and quietly took my phone and sent messages announcing that I had been arrested by Mawei police to Twitter in English via a twitter’s mobile web interface (www.dabr.co.uk). The messages were quickly translated back to Chinese by a Chinese user dupola and crazily retweeted by users, and this drive also attracted international attention. With a certain popularity in Chinese blogger sphere and Twitter, the news that I was detained was quickly spread to everywhere on the Internet. Interestingly, I also had enough time to read paragraphs of an e-book with my phone until a police realized that the phone was in my hands. He grabbed the phone from my hands, but it was useless, too late.