“Guo Baofeng, Your Mother is Calling You Home for Dinner!” (With Slideshow)

However, nobody knows whether Jia Junpeng exists or not. But the phrase may have inspired Chinese netizens to join the game by reminding them of their own childhood experiences.

But only days later, this phrase is now being transformed into an entirely new meaning after the creation of a new phrase: “Guo Baofeng, your mother is calling you home for dinner!”

Unlike Jia Junpeng, Guo Baofeng (Twitter handle: @amoiist) is a familiar name to many Chinese twitterers and he is also an active blogger, living in Xiamen. Here is how this story developed, from the Guardian:

The hundreds following amoiist on Twitter were used to his stream of messages. But they ended abruptly with two terse updates early yesterday morning.

“i have been arrested by Mawei police, SOS” he wrote. Then shortly afterwards: “Pls help me, I grasp the phone during police sleep.”

His followers quickly passed on his plea to other Twitterers. But since then there has been silence from amoiist – also known as Peter Guo, or Guo Bofeng – who is apparently the latest internet user to be caught up in an inquiry that began with claims of defamation but which police now say involves “state secrecy issues”.

As many as seven bloggers have been detained over claims that a 25-year-old woman, Yan Xiaoling, had been gang-raped and murdered. It was further alleged that the man responsible was connected to local authorities in her city in Fujian province, southern China.

Officials dismissed the stories, which first surfaced in late June, and insisted Yan had suffered a haemorrhage caused by an ectopic pregnancy. They turned their attention to tracking down those they suspected were responsible for the stories.

A screenshot of Guo Baofeng’s last Tweet from detention

And from Radio France International Chinese service, translated by CDT:

After five netizens were detained for libel in Fuzhou, there is a new wave of performance art on the Chinese Internet. A netizen is asking:”Everyone one send a postcard, call Guo Baofeng home for dinner.”

… Netizen Anti (安替) said: Sending a postcard to prisoners of conscience is an assymetrical way to protest. It will become popular because it is hard to trace back to participants, has a low cost to participate, and has an excellent online exhibition effect. It is hard for the authorities to ban, and it gives prison authorities clear pressure. 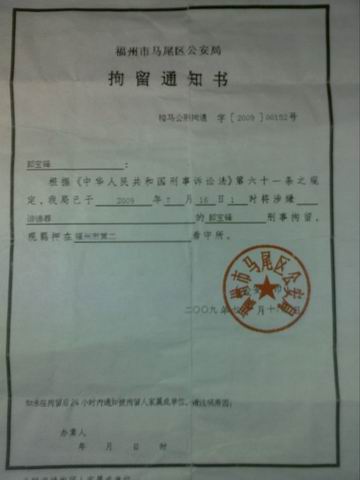 The following are examples of Tweets sent out about Guo Baofeng: 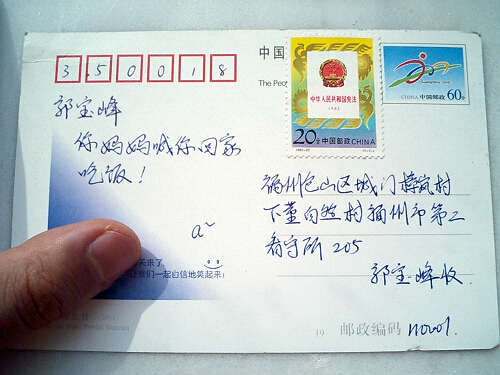 A postcard showing a stamp commemorating the Chinese constitution 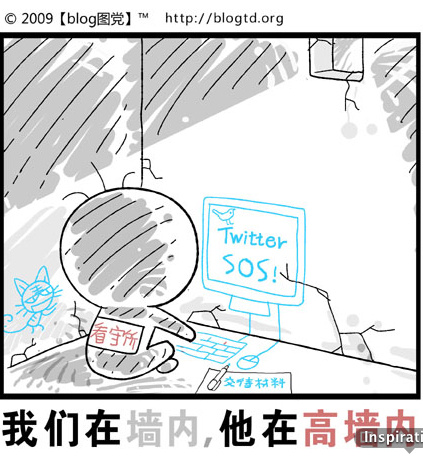 “We are behind walls (GFW), he is behind bars.” from blogtd.org. 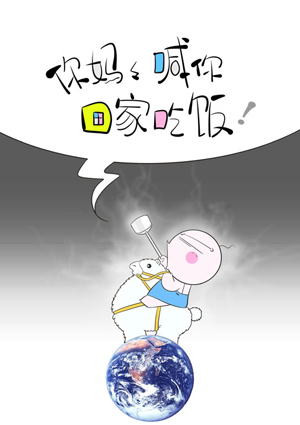 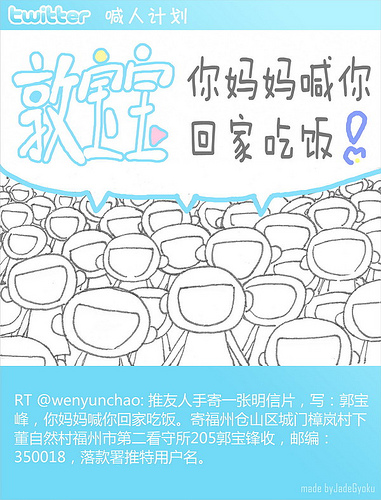