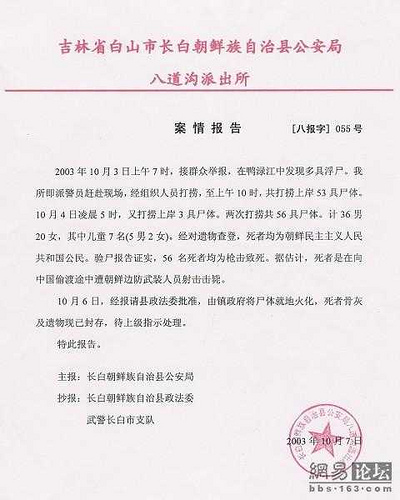 Chinese police in 2003 found the bodies of 56 North Koreans drifting down the Apnok River in October 2003, a newly published police log says. The 56 had apparently been shot trying to escape the North.

North Korea Economy Watch, a U.S. website, on Saturday carried photos from a report filed by Badaogou police station in Baishan, Jilin Province, reporting the collection of the bodies. This website said it obtained the photos from an anonymous blog on Chinese portal site Wangyi.

Badaogou police fished 53 bodies out of the Apnok (or Yalu) River following a tip-off from local residents on Oct. 3, 2003. It found three more bodies the next day. Possessions found on the bodies identified the 36 males and 20 females, including seven children, as North Korean.

Officers presumed that they had been all shot to death by North Korean border guards while attempting to cross the border.

Translation of the document: “PRC blog carried without comment a photo, apparently reposted from bbs.163.com, of an October 2003 Jilin Province, Baishan City, Changbai Korean Nationality Autonomous County Public Security police station report of bodies found floating in the Yalu River. All apparently DPRK citizens: 36 men, 20 women, 7 children. According to the medical examiner’s report, all had been shot to death. According to the report, It is supposed that they were all were shot by DPRK border guards as they attempted to sneak across the DPRK – PRC border. The bodies were cremated, and the ashes stored pending instructions from higher authority. ”