During the years of the Cultural Revolution, then Party Secretary Wu Renbao led Jiangsu Province’s Huaxi village towards urbanization. Today, Huaxi is China’s richest village. Tini Tran covers the story of Huaxi for the Washington Post:

Down the wide, tree-lined boulevards, rows of nearly identical red-roofed villas sit side by side. Manicured lawns and two-car garages are on every block. Each family has a house and at least one car, awarded by the community.

Welcome to the richest village in China. Average family assets total $150,000 in a nation where annual per capita income hovers around $2,000. The village’s major enterprises in steel, iron and textiles brought in 50 billion yuan ($7.3 billion) in sales in 2008. They belong to the Huaxi Group, the first commune corporation to be listed on a Chinese stock market.

Yet this corporate enclave of 30,000 people also remains essentially a commune, with land owned jointly and wealth divided among all. 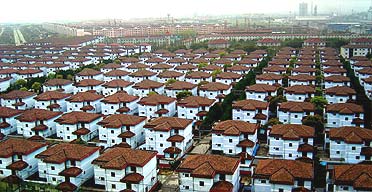 Homes in Huaxi, by Jonathan Watts for the Guardian

Meanwhile, the BBC reports from Nanjie, one of the last remaining communes in China, which, unlike Huaxi, hasn’t struck it rich and remains a throwback to the Mao era:

More than three decades after his death, Chairman Mao is still remembered fondly across China, but in Nanjie he has a special significance.

The village is one of the country’s last remaining communes, where workers still abide by many of the former chairman’s principles.

Most communes were disbanded years ago as China’s leaders began to turn the country’s planned economy into one governed by the market.

But the Nanjie commune is still going strong, providing its residents with their daily needs. Few people want to see it disappear.