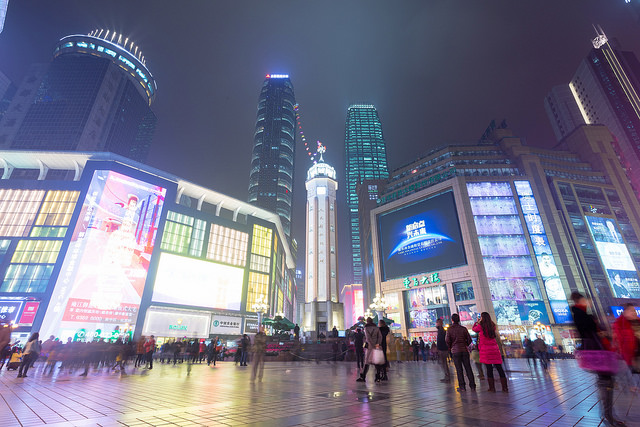 The hukou, or household registration, system has long divided China’s urban and rural residents, by limiting where people can live and what services they can access in places they move to. The government has promised to reform the system, which has created endemic inequalities between living standards for urban and rural residents, but it so far still remains in place and likely will for years to come. The economic growth that China has experienced over the past few decades has primarily benefited the urban residents; 70 percent of personal wealth in the country in now held in property, and city dwellers have been the largest beneficiaries. Mark Magnier of the Wall Street Journal reports:

Studies by the Asian Development Bank and the University of Michigan suggest China’s rich-poor gap is even higher once property and hukou status are taken into account. “The urban-rural wealth divide is much greater than the income divide,” Southwestern University’s Mr. Gan said.

Often, the difference comes down to a line on a map.

Wang Qiang, a 30-year-old construction engineer from a village in northern China, bought an apartment in 2014 in the Banyan Tree Harbor residential complex astride a garbage dump in Yanjiao, just outside Beijing, across a dying river in Hebei province.

Looking across the dry riverbed separating Yanjiao from the capital, Mr. Wang said he hopes Beijing will someday absorb his community.

Giving him hope, some cities across China have extended property-buying rights to rural hukou holders around them. With a Beijing hukou, Mr. Wang’s family would have access to better schools and hospitals, and his two-bedroom apartment would be twice as valuable. [Source]

In China’s rapidly growing cities, urbanization has created new problems and patterns in housing, as Perry Arrasmith writes in the Harvard Political Review. In an effort to control its size and population, Beijing is planning to limit its population size and along with other large cities has implemented policies to discourage migrants from moving there. For Project Syndicate, Andrew Sheng and Xiao Geng write about the urban housing crisis:

Of course, the housing situation is most urgent in the first-tier cities. And their governments have moved quickly to cool the market. Beijing, for example, raised the required down payment for residents purchasing a second flat for investment to as much as 80 percent of the price, and barred non-residents from such investments altogether.

But this is just a temporary fix. A longer-term solution will require the authorities to address the fact that demand for a limited supply of residential property is high and rising, owing to the rapid flow of often-young Chinese talent to cities that offer access to economic opportunities, not to mention better public infrastructure. Policymakers must determine the proper balance between state control and market forces in guiding urbanization throughout the country.

In IPP Review, Yongnian Zheng writes about some of the consequences of China’s urbanization project, including the “ruralization” of urban areas due to the influx of migrants without a city hukou:

[..R]eform of the household registration (hukou) system did not match the speed of urbanization. The consequence is the ruralization of urban areas. Of the 56 percent urban population, only 40 percent have urban residence permits. In other words, there are over 10 percent of people in the cities who are rural workers or farmers. They have lived and worked in the cities for a long period of time and their offspring have already grown up, yet they are not integrated into the cities. Almost all the major cities in China have “villages in the city” and rural workers.

These “villages in the city” are born from the rapid expansion of urban areas, where old villages are enveloped by skyscrapers all around. There have been efforts to improve the living conditions of these villages, but there remain serious concerns about employment, livelihood, and safety. [Source]

But as much of the population moves to the cities, the rural regions are left to fend for themselves with a host of new problems, among them, the dearth of schools. Neha Thirani Bagri reports for Quartz:

In 2001, in response to growing urbanization and emptying village schools, the Chinese government launched a campaign to close remote village schools and pool resources in centralized schools located in towns. In the years following, rural schools began to shut down at an alarming rate. Between 2000 and 2015, nearly three-quarters of all rural primary schools—more than 300,000 total—were permanently shuttered, according to the Economist.

For those Chinese students left behind in rural villages, this has meant access to quality education has become scarce. The New York Times reports that the approximately 60 million “left-behind” children in rural schools, who live with their grandparents in villages whiles their parents migrate to big cities looking for work, are at a huge educational disadvantage compared to their urban peers. While 70% of students in cities attend senior high school, fewer than 10% of rural students make it that far. [Source]

Some experts believe that the resources and attention focused on managing the newly urbanized areas need to shift to the rural areas in order to provide incentives for people to stay, rather than moving to overcrowded cities where they may not have access to basic services. From Eustance Huang at CNBC:

While industrialization has played a significant role in lifting many Chinese citizens out of poverty, [John] Donaldson [of Singapore Management University] said the importance of rural development should not be overlooked. Citing former Chinese president Hu Jintao’s introduction of healthcare and education to rural areas, Donaldson said such initiatives give citizens the option of remaining in rural areas — rather than shifting to megalopolises in search of a better life.

At the same time, those measures alleviate the problem of overcrowding in urban areas.

Although he recognized that urbanization is a often tied to populations becoming wealthier, Donaldson said that it “should happen a lot more organically than people are planning.”

“I think it’s not urbanization for its own sake,” he stressed, warning that such inorganic shifts to big cities could wind up fueling “a hidden time bomb” in the Chinese economy.[Source]