Beijing’s glaring wealth inequality became the talk of the nation after a chart comparing two coronavirus patients’ daily itineraries went viral last week. One patient lived a life of sheer luxury, while the other worked over 30 odd jobs over the course of two weeks, all in the wee hours of the night, while living in one of the capital’s poorest neighborhoods. Subsequent reporting revealed the second patient to be Yue Zongxian, a 44-year-old fisherman from Shandong, who had gone to Beijing to petition for help in the search for his missing son. What began as a story of wealth inequality quickly grew to encompass the forces that tear impoverished families apart and the official malfeasance that prevents their reunion. Yuen Ye and Ding Yining of Sixth Tone translated the contact tracing chart that went viral: 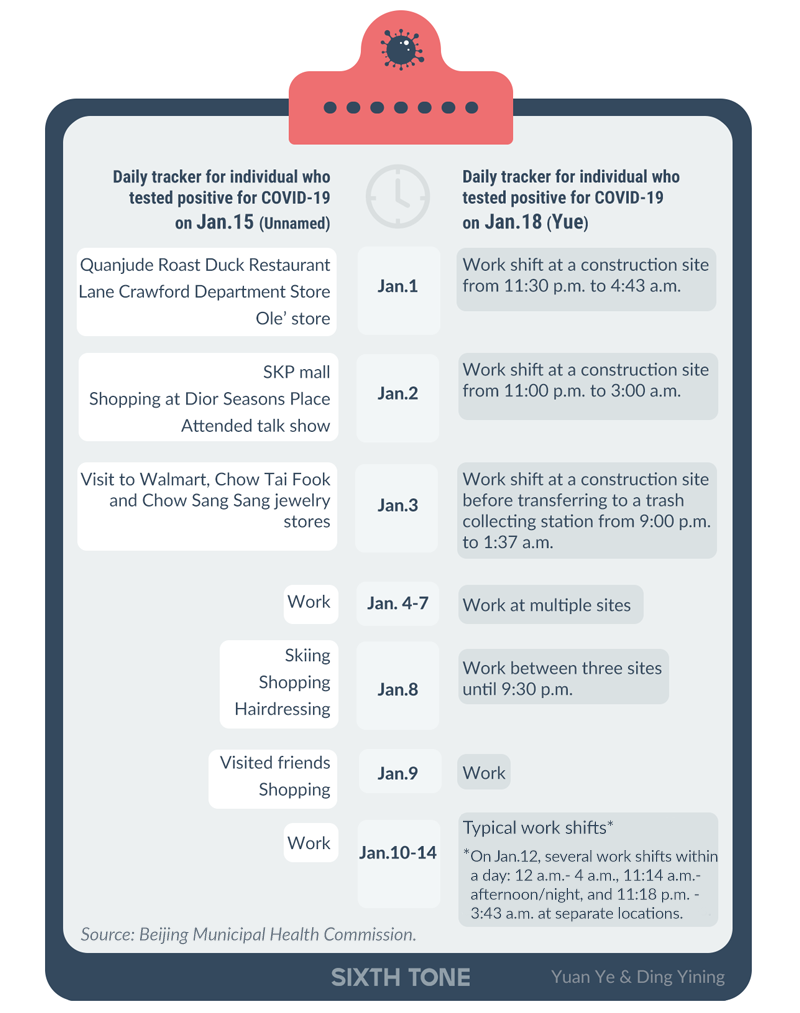 @小仙女美食君: Those who dress head to toe in silks are not the ones who tend the silkworms.

The above comment is a reference to Hao Jingfang’s sci-fi novella “Folding Beijing,” translated into English by Ken Liu, which follows a sanitation worker living in a dystopian future Beijing. In the story, the city’s overcrowded population has been sorted into separate, class-based shifts occupying different physical forms of the city, which expand when their occupants are awake and fold away when they sleep. Yue’s late-night work habits (a product of Beijing’s restrictions on trucks entering the city) echo those of the short story’s protagonist, who is allocated little space and less time to live. From the story, in Uncanny Magazine:

The best way is to reduce the time a certain portion of the population spends living, and then find ways to keep them busy. Do you get it? Right, shove them into the night. There’s another advantage to this approach: The effects of inflation almost can’t be felt at the bottom of the social pyramid. Those who can get loans and afford the interest spend all the money you print. The GDP goes up, but the cost of basic necessities does not. And most of the people won’t even be aware of it. [Source]

Yue’s plight was only brought to light due to detailed contact tracing by Beijing authorities. The public health measure has previously inspired reactions both dangerous, as when a young woman in Chengdu was doxxed and harassed for her lifestyle, and humorous, as when a Japanese expat’s itinerary was used as a guide to the most authentic Japanese food in Shanghai—but never a national outpouring of emotion such as this. Yet little was known about Yue Xianzong until China Newsweek, a state-owned media outlet, interviewed him.

In the interview, Yue revealed that he came to Beijing to search for his 19-year-old son Yue Yuetong, who went missing in 2020 from the seaport city of Weihai in Shandong Province. Yue Yuetong disappeared in August of 2020 after leaving work due to a stomach ache. He never returned home. Yue Xianzong has travelled all over northern China searching for him, working odd jobs along the way to support his family. Yue alleged to China Newsweek that local police were derelict in their search for his son. The interview was translated in full by the blog Pekingnology, run by Xinhua journalist Wang Zichen:

[…] I’ve spent tens of thousands of yuan looking for my eldest son so far. All my jobs were odd gigs. When I earned money, I went to look for my child. When I ran out of money, I resumed working odd gigs. I have been working hard – just to get find [sic] my child. I work hard and even if I exhaust my life in it, I will get my child back. [Source]

The interview went viral, prompting widespread demands that the government aid Yue in his search for his son. The hashtags “Yue Yuetong Come Home” and “The Internet Helps Search for Yue Yuetong” both went viral on Weibo. CDT has archived and translated some netizen laments, demands, and efforts to help:

“Big data” can dig up everything about what this poor man was doing every minute of every day, but it can’t help him find his son.

@@L丶荣耀: I hope the government will take this opportunity to help this poor day laborer, and find out what happened to his son, and how the boy disappeared. Please help him. How awful it must be, having to quarantine like that, with no money, and unable to find his son. One good thing is now he can rest for a while, but he must still be so worried. What a hard life.

@小翟永远开心喔: Does anyone have any info to share, so we can all help find his son? 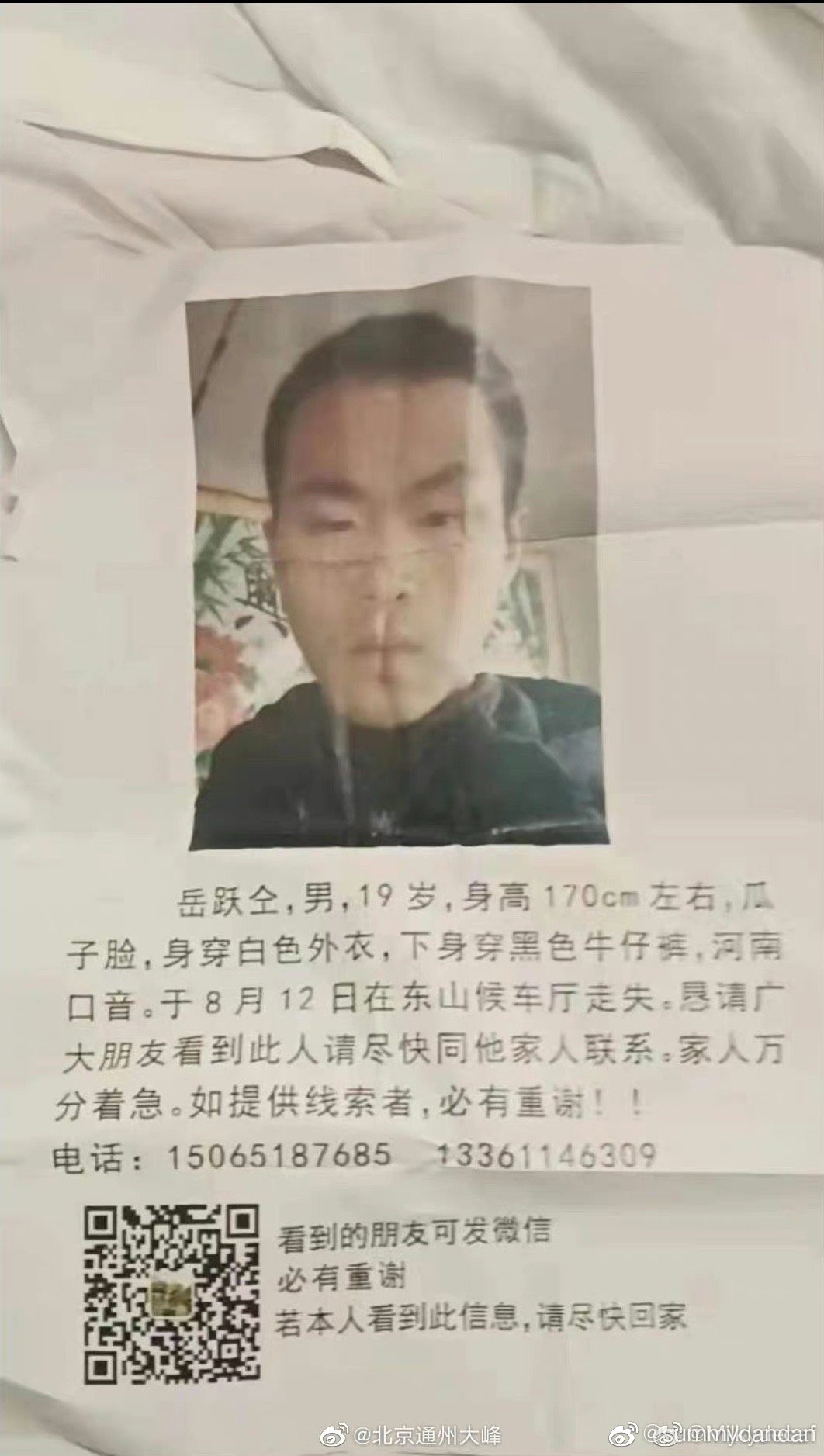 @summydandan: Missing: Yue Yuetong, male, age 19, 170 cm tall [5’6″], heart-shaped face, wearing a white coat and black jeans, Henan accent. Disappeared after walking out of a bus station waiting room in [Rongcheng], Shandong on August 12, 2020. If anyone sees him, please contact his family as soon as possible. We are very worried about him. Substantial reward for any clues to his whereabouts!

In response to the interview, police in Weihai released a notice stating that Yue Yuetong’s body was found the week after his parents reported him missing. Yue Zongxian and his brother reject the police conclusion. In an interview with The Paper, a Shanghai-based state-owned news outlet, Yue Zongxian’s brother said that the body they were shown in the summer of 2021 bore no resemblance to the tall, skinny Yue Yuetong.

After the essay went viral, censors blocked WeChat users from using the app’s share function to repost it. This prompted comparisons with the infamous mass censorship of Dr. Ai Fen’s interview with China’s People magazine about coronavirus in early 2020, in which she said: “If I had seen this day coming, I would have [warned people] everywhere, criticism or no.” A screenshot shared by science writer Fang Shimin on Twitter seemed to show the ostensible reason for the censorship in Yue’s case: because “China already eliminated poverty in 2020, the essay’s language is inappropriate. Furthermore, the one-sided focus on his poverty misleads the audience.” Reminders of China’s wealth inequalities often make waves—perhaps because the government spends so much time and effort on propagandizing its victory over poverty and commitment to “common prosperity.” Approximately half of China’s population lives on less than $2,000 a year, a fact so shocking that it became a topic of national discussion after Premier Li Keqiang mentioned it during a press conference in 2020.

A recent article by WeChat account 人间后视镜 [Humanity in the Rearview Mirror] examined hundreds of short videos posted by Yue and his wife to Kuaishou, a popular video-sharing mobile app. The 34 videos selected for the article offer a vivid illustration of the Yue family’s home life, economic struggles, and ongoing search for their son. CDT has selected and translated descriptions of some of these images, gifs and home videos:

A video from February 11, 2020, shows eldest son Yue Yuetong at home, giving his father a massage. 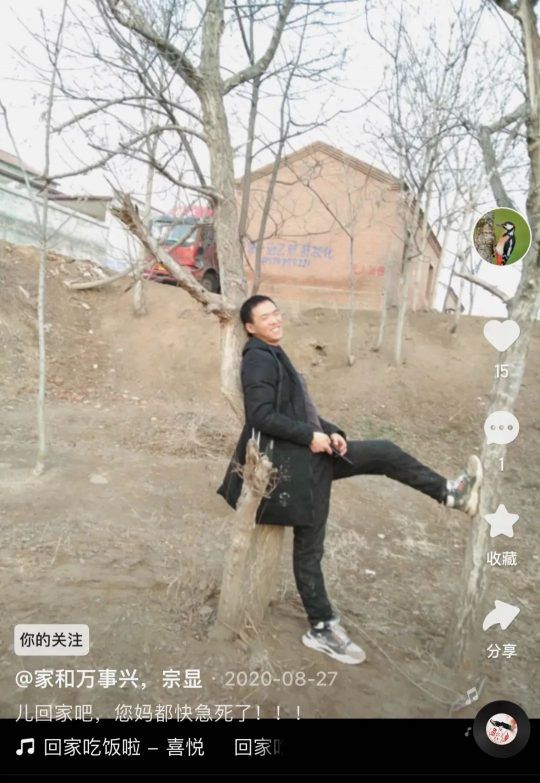 On August 27, 2020, Yue Zongxian posts his first entreaty to his missing son: “Come home, son, your mother is worried sick!” The accompanying photo, the most widely circulated image of Yue Yuetong on the internet, shows him dressed in black and leaning against a tree.

[NO IMAGE]
Every night between 7:00 to 8:00, Yue’s wife posts a song on Kuaishou. [The songs are different, but all have missing loved ones as a theme.]

[NO IMAGE]
In a January 20, 2022 video taken from his hospital bed, Yue is still thinking only of his missing son: “Son, when are you coming back?” Thus far, the video has received more than 1,300 likes, and many supportive comments, such as, “The whole internet is helping you search! Hang in there!” [Chinese]

Yue’s living situation shows that acute poverty still exists, even in Beijing. Yue had rented a roughly 100-square-foot room in a village, Shigezhuang, on the eastern outskirts of the city for the equivalent of $110 dollars a month. A local resident told The Beijing News that “because Shigezhuang village is soon to be demolished, most renters are day-laborers.” Another nearby village in Chaoyang was the epicenter of a 2017 mass-eviction campaign designed to push Beijing’s “low-end population” outside the city limits. The top Baidu autocomplete results for the village offer a telling snapshot of conditions in the community: 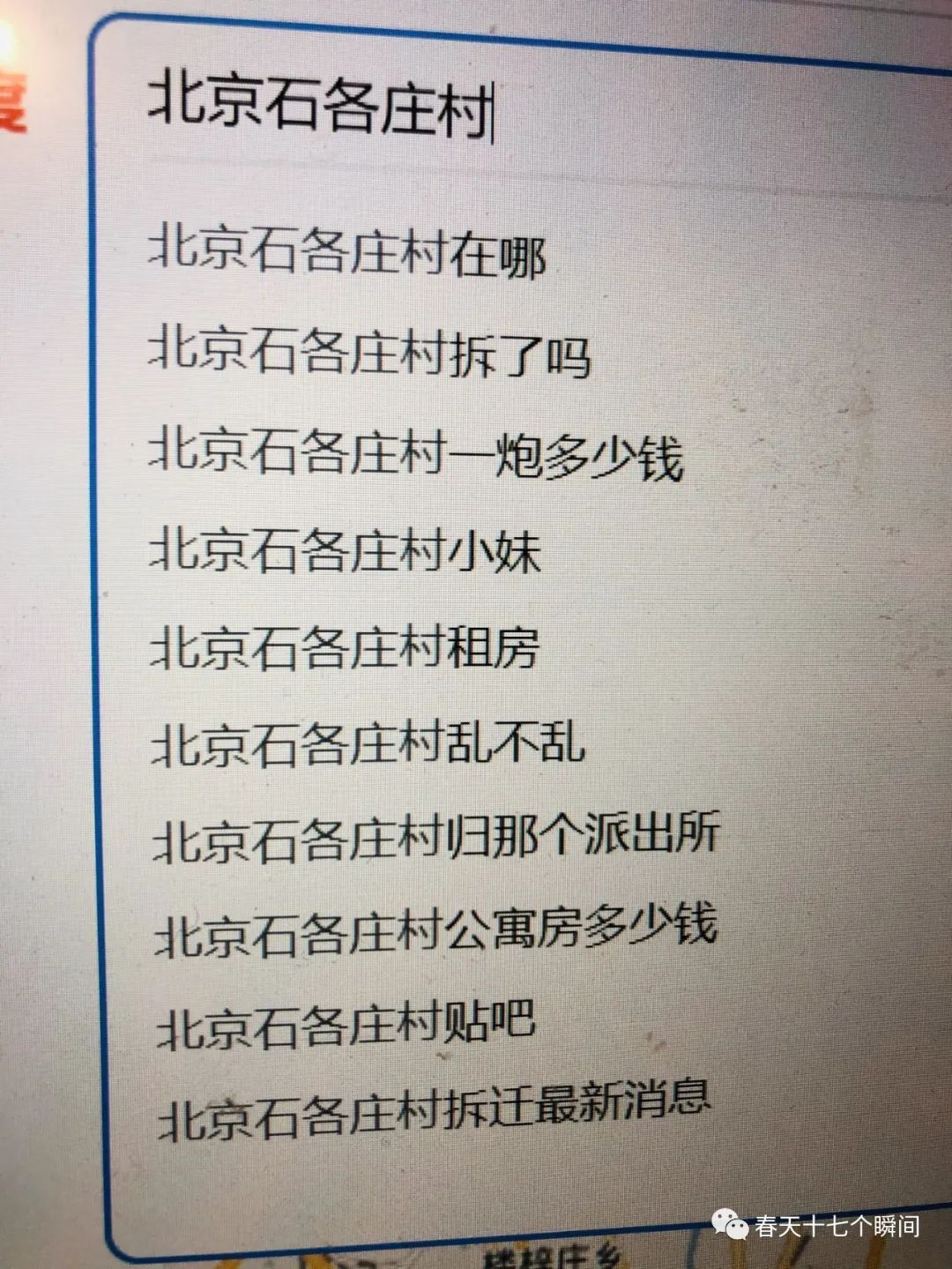 …price for a hooker?

…under which police station?

…how much to rent a flat?

Shigezhuang is now under lockdown due to COVID. While authorities have been careful to send food to the village (and to publicize their deliveries) following controversy over hunger among locked-down people in Xi’an, residents of other such neighborhoods have not been so lucky. Day laborers placed under lockdown in Tianjin were not permitted to use city services, leading to a brief, angry protest, video of which was shared widely on social media:

“We want to eat our fill. Does the Chinese Communist Party support us?” says the man on the car. Lots of clips circulating of the incident. Here we can also see the crowd demanding the cops release the arrested: “Let them out!”https://t.co/FFHuv7h5yL

While the nation followed Yue Zongxian’s search for his son, another quest also drew eyeballs: Liu Xuezhou’s search for his biological parents, who sold him at birth. The seventeen-year-old found his parents with the internet’s help, only to commit suicide after both parents abruptly cut ties with him a month later and then accused him of attempting to “guilt trip” them in a major national paper, bringing a wave of online vitriol down on the boy’s head. A viral essay reflecting on the two tragedies also reached for a literary analogy, but eschewed Chinese sci-fi in favor of a Russian classic: “In the bone-chilling wind of winter, the son-searching Yue Xianzong and the father-searching Liu Xuezhou arrived at their respective ends of the line. In a fickle world where human emotions run hot and cold, this points to a cruel reality: ‘All happy families are alike; each unhappy family is unhappy in its own way.’”

With contributions from Cindy Carter.