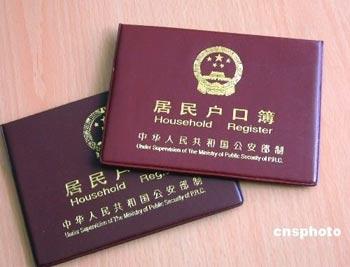 Following up on the central government’s earlier promises to reform the controversial hukou household registration system, Beijing’s municipal government announced on Monday that the associated urban and rural distinctions would be gradually eased until all residents enjoy equal residency classifications. The hukou system has long allowed urbanites access to better public services, and prevented rural migrants who work in cities from accessing local services. At the South China Morning Post, Zhuang Pinghui reports:

The Guidelines on Further Advancing Household Registration Reform released on Monday said the classifications of urban and rural household registration would be gradually scrapped and all Chinese would be registered as residents instead.

New policies on education, health and family planning, social security and property that cater to the unified household registration would also be drafted.

[…] He Xuefeng, a sociology professor at the Central China Science and Technology University, said the central government has recognised a public desire to gradually eliminate the differences in social services and benefits that come with urban and rural household registration and to offer equal benefits.

[…] “China is striving to provide equal social services but it will take quite some time, maybe a year,” He said. “Scrapping the household difference paves the way for that goal.” [Source]

Since the 2014 reform announcement, 30 other provinces and municipalities (of a total 31) have mapped out a path towards removing the urban-rural distinction. As of now, only the Tibet Autonomous Region has yet to announce similar plans.

Xinhua’s coverage describes the types of services that will be equally available to all Beijing residents, the number of people nationwide set to be affected by hukou reforms, and the economic situation of the early days of the PRC which led to the creation of the now outdated system:

According to the guideline released on Monday, Beijing municipal government will no longer distinguish between urban and rural residents, but establish a unified permit system. Education, health, employment, social welfare, and housing will be equal for all Beijing residents.

[…] The reform is set to affect hundreds of millions of Chinese people. By 2015, the mainland urban population — with or without residence permits — was 767.5 million, or 55.9 percent of the total, while the population categorized as rural was 606 million, according to the National Bureau of Statistics. [Source]

At Caixin, Wang Su and Li Rongde report on concerns that while farmers who collectively own rural land will be better able to access services under the reforms, they still are not protected from having their land sold to private developers:

But in recent years, a booming property market has pushed up the value of land owned by rural farmers, and many — particularly those in the affluent east coast — have opted to hold on to their agricultural hukou because of the rising value of the land and benefits tied to their land.

However farmers’ plots remain collectively-owned via a village committee meaning that villagers faced the risk of the village committee selling their land to developers, without giving individuals much say in the process.

Beijing’s decision to unify its household registration system would benefit elderly farmers by giving them access to affordable medical care, Professor Zhu Lijia from the Chinese Academy of Governance told The Beijing News. But authorities should introduce policies to protect farmers from illicit land-grabbing and allow them to trade their land in the open market, he said. [Source]

The newly announced changes to Beijing’s system will affect those already in rurally-classified areas of the municipality. In August, Beijing released a draft description of a points-based system allowing some migrants to qualify for household registration in the capital. Earlier this month at The Atlantic’s Citylab, Mimi Kirk described how that proposed points system, which resembles programs already in effect elsewhere in China, is “stacked in favor of well-educated elites.”

The gradually reforming hukou system is also partially responsible for the phenomenon of rural “left-behind children,” left in often poverty-stricken villages as their migrant parents toil in a faraway city. Early this year, the State Council proposed several measures to better protect left-behind children. At The Economist’s 1843 magazine, Alex Ash traveled to Guizhou to report on the situation of several of these children in the village of Paimo.