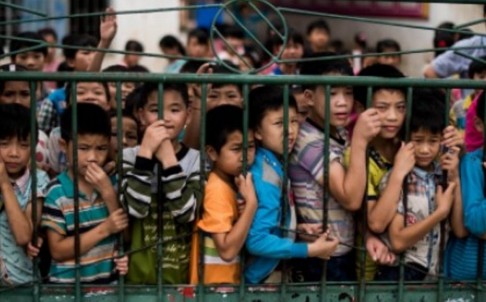 China’s State Council has unveiled a series of proposals aiming to protect the estimated 61 million “left-behind” children who remain in the countryside as their parents seek better livelihood in bustling coastal manufacturing centers. The South China Morning Post’s Mimi Lau reports on the proposals:

The State Council’s proposals are designed to cut that number, in part by urging parents to take their children with them or arrange adult supervision to ensure that children younger than 16 do not live alone.

The proposals, dated February 4, also outline a more active role for schools, community authorities and other government-affiliated organisations in monitoring the welfare of these children.

They would provide services and support, and also report cases where children may have been abused or have gone missing.

The plans would involve an overhaul of existing laws and systems to strengthen parental supervision.

In a first, the government said it would set up a mandatory reporting mechanism for emergencies. But there was no detail on what the system might be. […] [Source]

The recently announced proposals follow the announcement late last year of imminent reform to the long controversial household registration, or hukou, system that limits rural residents from accessing public services—including education and health care for their children—in the cities where they work.

At Caixin, Wang Su quotes an activist who praises the intent of the central authorities proposals, but worries they may not go far enough:

Du Shuang, the head of Growing Home, a Beijing-based non-governmental organization that advocates for the rights of left-behind children, said that the government is moving in right direction by laying out guidelines addressing the plight of the youngsters. However, it must offer more concrete support, such as a system of social workers in underdeveloped areas, she said.

Du said that both schools and the township government were aware of the conditions that the four children in Bijie were living in, but they did not have the resources to help them.

The children of migrant workers would be better off joining their parents in the city, but the reality is that the youngsters are denied access to basic services such as public schooling when they move, Du said. [Source]

CNN’s coverage of the proposals includes skepticism over local authorities willingness to comply with the central government guidelines from a grandmother in rural Anhui province:

“I’m happy to hear there are new regulations,” said 73-year-old old Tang Xinying. “I just doubt the local authorities will implement them — they only care about themselves.”

[…] Tang, who lives in a village in the inland Anhui Province, has been raising her 7-year-old grandson, Lu Yiming, by herself since his parents left home to seek city jobs.

Lu’s mother died of cancer last year. His father, Tang’s only son, works as a construction worker in another province hundreds of miles to the north. […] [Source]

In recent years, the much attention has been given to tragic deaths suffered by vulnerable youths left-behind in rural China—by suicide, violent attack, or accident. Read more on urbanization, “left-behind” children, and the hukou system, via CDT.