China Is Losing a War Over Internet 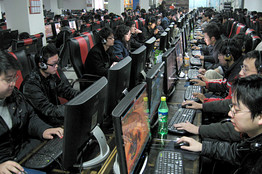 These appear to be dark days for the Internet in China.

Four months into a crusade against Internet pornography, the government is closing thousands of sites—some pornographic, some not—and tightening rules on who can register Web addresses inside China.

A backlash against Beijing’s moves to block access to the Internet has spurred attempts by many users to ‘scale’ the so-called Great Firewall of censorship.
Foreign sites such as Facebook, YouTube and Twitter, blocked by censors in the run-up to the 60th anniversary of Communist Party rule on Oct. 1, remain inaccessible to most Chinese users. Several prominent critics of the state who used the Internet to spread their message have been detained or imprisoned.

Yet this list of casualties obscures a larger truth: The censors are losing.

… That the Internet threatens, fundamentally, the party’s information monopoly is one of the few facts that China’s liberal activists and its government enforcers agree on. In an essay published in December in a government magazine, Minister of Public Security Meng Jianzhu warned that the Internet “has become an important means for anti-China forces to engage in infiltration and sabotage, and to enlarge their power of destruction, which brings new challenges to the public security agencies to maintain national security and social stability.” He pointed to the use of the Internet to spread word of unrest before the government has a chance to control it.