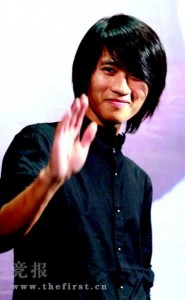 The Hong Kong based magazine Asia Weekly (亚洲周刊) recently named blogger, author and race car driver Han Han as “The Person of the Year 2009“. CDT has translated their interview with him; Part 1 is below. Part 2 will be posted in coming days:

Q: Do you have regular time to write?

Han: Since the timing of various bizarre news events in our country is irregular, my time spent on writing is also irregular.

Q: Over the past one or two years, you’ve been paying attention to a large number of public issues, speaking out and even taking action, which makes you more like a “public intellectual.” How do you explain this change?

Han: I’m just a writer, one who doesn’t have a stance but can only tell right from wrong. A big defect with Chinese is that they only take a stance but don’t distinguish right and wrong. As for me, if what the government does is right, I would praise it. But it’s a pity that the authorities don’t give me many such opportunities. And even when they do something right, the authorities exaggeratedly praise themselves already…

Q: A lot of critics feel powerless because the things they criticize continue without stopping. Do you have this feeling of powerlessness?

Han: The literati is merely the literati. If the literati could really change something, it would take a long time. But if one day they really changed something quickly, they must have been literati selected by some political interests. If you think of everything as fun, then you won’t feel so powerless. The purpose for [the literati] is to make everyone in the world to feel powerless, including the president or the chairman, then that makes a better world.

Q: Did the Wenchuan earthquake touch you much?

Han: Actually it was very weird. The Wenchuan earthquake was a catastrophe, yet it really didn’t touch me very much. … Actually concrete things touch me more easily. So I can especially understand why Ai Weiwei has been collecting the deceased students’ names one by one. Because the individual is the most touching. When all the people are bundled together, and when death is just a number, it’s hard to touch people.

Q: Where do you think your attitude of valuing individual and freedom come from?

Han: I think I should thank the authorities for this attitude. After some political movements or student movements, they chose to dilute a lot of things, especially beliefs. One of my friends directed a film, “Dreams May Come.” Everything was ok with the film except one scene, which blocked the film from passing the censorship. It was two people chatting and mentioning the word “belief”. And the State Administration of Radio, Film and Television said they could not approve the film, as long as it has this word. This demonstrates that the authorities are avoiding beliefs. But it brought a good result, which is no one believing anything… Many say, your generation is doomed, for you don’t have anything to believe in but worshiping money. I say the money worship is not bad. Although it’s not noble, it’s safe, at least it’s harmless to the society. I think this is actually the beginning of the gradual awakening of a nation. Great! It finally has no faith, and finally there won’t be various evil things in the name of faith.

Q: How do you view the relationship between you and the country?

Han: I said in my comments to last year’s Carrefour event that we should differentiate motherland and mother. Some always said to me that no matter if what I said was right or wrong, I can’t ignore the major matters of principle, and the overall national interest is a major matter of principle. I think this is too narrow. I hope that the aliens suddenly come invade the earth, and only then can they realize it belongs to human beings, not the nation. … The overall national interest and motherland are most deeply ingrained in our education. But many people have vague concepts of them, and they tie the nation and political regime together. This doesn’t matter, and it takes time for them to figure it out. When you realize you’re very poor, you can’t afford a house and you can’t afford anything; when you realize some evil people are living a high life; when you turn to suicide and they demand a fee to get your body out of the water, I believe your spirit of the deceased will figure out a lot of things eventually.

Q: Ai Weiwei is in a very dangerous situation due to his continued concern for the deceased students in the Sichuan earthquake. Another guy who paid the same attention, Tan Zuoren, was put in jail over half a year ago. What do you think of their situation?

Han: I’ve been puzzled. What on earth did they do? They didn’t do anything. … I can only say that the authorities have uncertainty. They don’t have criteria. If they had many criteria, like you can say this but not that, I could totally accept it. If the authorities had legislation, like a “Forbidding Discussion Law”, I could accept it. I’m not kidding you. As long as you put things on the table: These are sensitive words and you can’t say those sensitive words; if you say them, you should take a certain responsibility. Since you stipulated it, ok, we wouldn’t say it. We save face for each other. In fact the whole world knows what kind of regime this country has. After all, as long as you can have your people live a good life, it’d be fine at the current stage. And you should make it clear what we can say and what we cannot. However, you don’t tell them the criteria, and once they say it, you go punish them. This is like the crime of hooliganism in the past: The definition was in their hands.