From Voice of America: 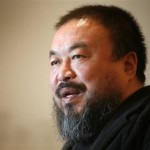 But a violent demonstration in late December in Tehran involving thousands of Iranian protesters was enough to prompt Chinese activists to register the Internet domain name “CN4Iran-dot-org” (CN4IRAN.org) – or China for Iran.The Web site’s slogan is “We are watching you, we are supporting you. Go, our great Iranian friends, go!” A picture on the site shows a clenched fist against a red and green background… Prominent artist Ai Weiwei is one Chinese who has been closely following developments in Iran. He says he was especially busy on-line in the early morning hours of December 28, as the clashes were occurring in Tehran.Ai says he was constantly typing that night and sent countless tweets. He says he thinks the Iranians must have found it so strange, and wondered who is Ai Weiwei?… The organizer for CN4Iran says, in his words, “anyone would be afraid of getting in trouble” with Chinese authorities. But he says he thinks what activists like him do is “not hypersensitive” or illegal. He points out that authorities have their own language and ways of communicating, while, ordinary people have their own.

See also this past CDT post on the China for Iran twitter campaign and the Chinese government’s objection to sanctions on Iran.