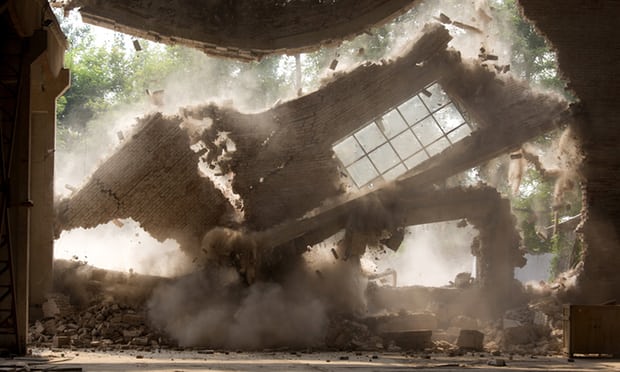 Dissident artist Ai Weiwei posted videos on Instagram showing Chinese authorities razing his former studio in Beijing. The demolition began Friday without advance warning, leaving little time for the removal of artworks stored in the space. Ai has been living and working in Berlin since leaving China in 2015. Emma Graham-Harrison at The Guardian reports:

“Farewell,” Ai wrote on Instagram, below footage of an excavator clawing at a hole in the concrete wall, as workers boxed artwork in the cavernous hall.

“They started to demolish my studio ‘Zuoyou’ in Beijing with no precaution,” he wrote in English.

He posted a series of other images of the studio, a former car parts factory in Beijing’s outer suburbs, which has been his main base since 2006.

Some images showed it being dismantled, others showed it filled with monumental works from exhibitions held in calmer days. [Source]

It’s unclear whether the demolition is targeting Ai. Beijing authorities have demolished large swaths of the suburbs in the past year in a building safety campaign, typically giving at least several days’ notice.

Ai, who has called attention to human rights violations and government corruption in China, was held for more than two months in 2011 on alleged tax evasion.

As CBS News correspondent Holly Williams reported last year for 60 Minutes, the Chinese government wanted everyone to forget about Ai, blocking his name on the internet in China and making it impossible to search for him. But that didn’t stop him from needling the authorities relentlessly. When they put his studio under surveillance, he decorated the cameras with lanterns, then fashioned replicas out of marble for his exhibitions.

When officers were ordered to follow his every move, he got his own camera man to film them filming him, ridiculing the state in a way no one else in China had ever dared. [Source]

Eileen Kinsella reports for ArtNet that several galleries and other businesses in the Caochangdi arts district outside Beijing, which Ai helped build up, have been asked to move out to make way for development:

“It’s a stressful time and it’s so unfortunate for de Sarthe and the galleries and artists that have been abruptly asked to leave Caochangdi,” said Christophe Mao, founder of Chambers Fine Arts, which has a gallery nearby and another in New York. “From my understanding, the area that has been asked to vacate is located along a strip of land next to the railroad. From the government point of view, these buildings were illegally built.”

Chambers, however, is located in a “legal zone,” on land that has been leased from Chaochangdi village for 20 years, Mao said. “So, although we have also been threatened numerous times with eviction, even as recent as a few months ago, we have been spared for now.”

Caochangdi has become a destination for contemporary art in Beijing. Because of Ai Weiwei’s presence, a lot of international press has visited the area. “Sadly, it is entering its twilight as a truly contemporary art hub,” Mao said. [Source]

CDT cartoonist Badiucao is calling for solidarity with Ai using an illustration depicting the artist wounded by an excavator:

cartoon for @aiww
Ai Weiwei’s art studio in Beijing was demolished without warning.
In solidarity with Ai Weiwei!
漫画声援艾婶，昨日其北京工作室“左右”在未经通知下强拆。据报道，强拆时，工作室内还存放作品和工作室设备。 pic.twitter.com/KDSS07LS2s

Ai is preparing several shows and events on the U.S. West Coast this fall, according to Art Newspaper. Read more about Ai’s art and activism via CDT.