At least 63 are dead after intense flooding in Henan. Over 160,000 first responders have been sent to Henan to aid rescue and recovery efforts. Although the crisis is not yet over, the machinery of the state is already attempting to recast events in a generally positive and heroic light. CDT has obtained and translated two censorship directives: the first ordering the media to focus on disaster recovery and avoid using “an exaggeratedly sorrowful tone” in coverage; and the second requiring vendors “not give interviews to foreign media, and deny the other side any opportunity to take quotes out of context and distort the facts.”

One viral cartoon on the relief efforts rendered the incoming first responders as regional cuisines and Henan as a bowl of Hulatang, a spicy, peppery local soup—adding a cutesy flair to life-and-death rescue work. The personification rubbed many the wrong way, bringing back memories of support for Wuhan hot dry noodles and Xinjiang cotton at the expense of solidarity for actual people. The cartoon is also reminiscent of the cartoonish anthropomorphization of construction equipment used to build emergency hospitals early in the COVID outbreak, which was first adopted by state media from social media users, and then targeted by a directive against “overly entertaining and jocular content.” A number of Weibo users found such cartoon abstractions dehumanizing, and viewed them as an indictment of society’s ability to face grave tragedies directly. As Weibo user @光明处是你我归处 wrote in response to the cartoon, “They are human beings, not bowls of Hulatang”: 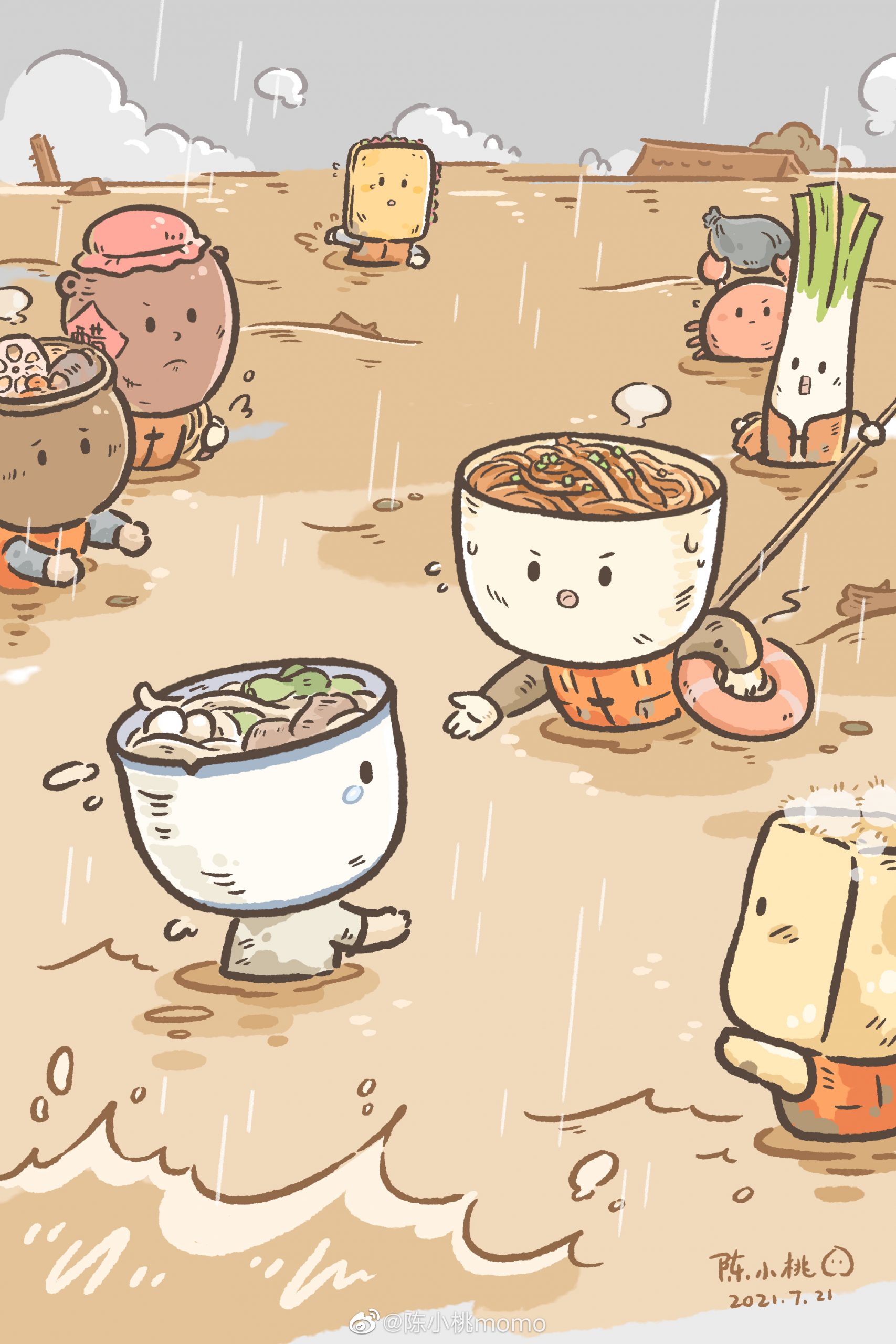 Artist 陈小桃 shared the cartoon on Weibo with the caption: “Hang in there, Henan Braised Noodles. Hot Dry Noodles have arrived. We’ve all arrived! ❤️ / We are ‘with’ you [punning on an ancient character for Henan]/ Stand strong, Henan. We’ve all arrived.” 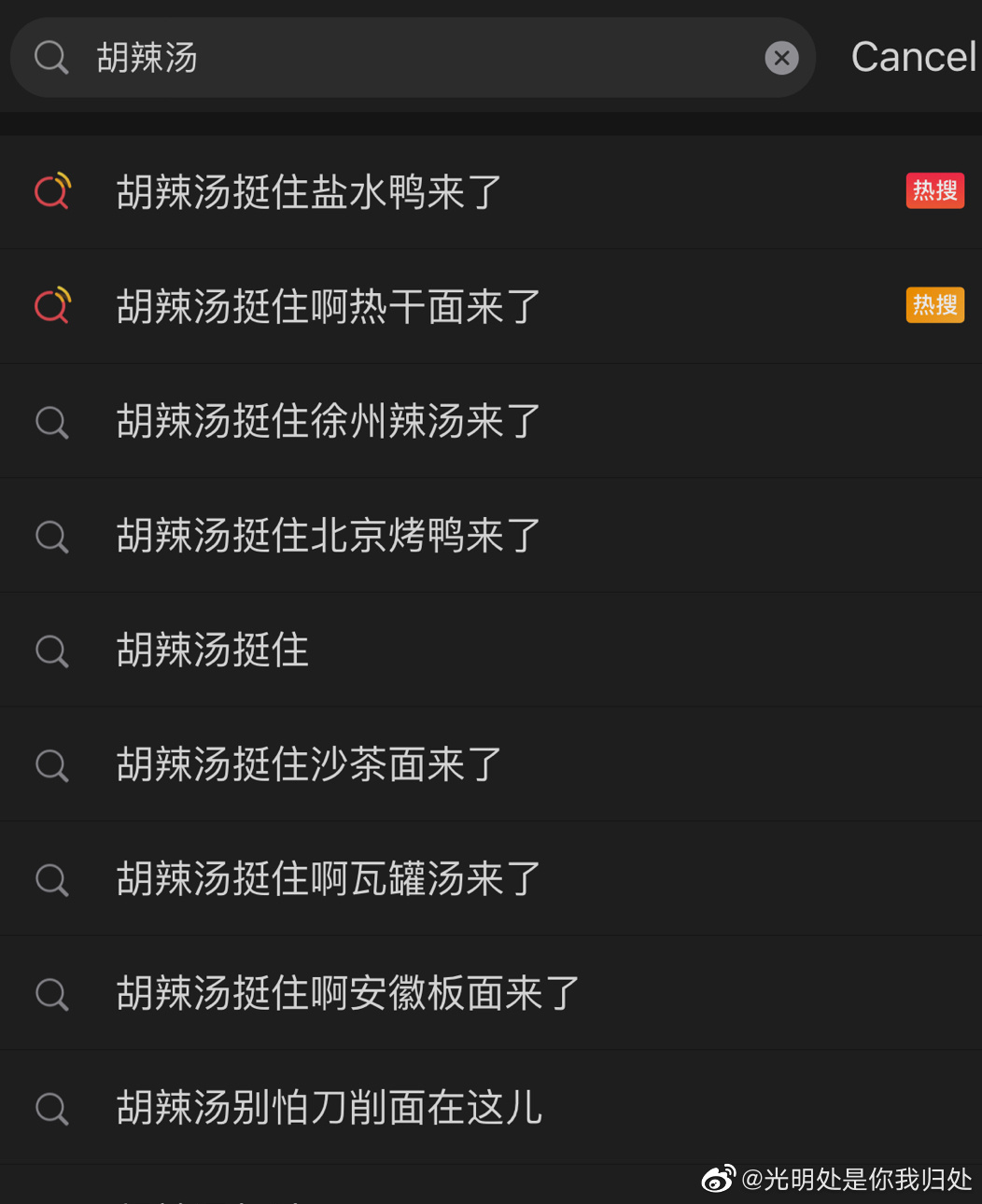 @光明处是你我归处: They are human beings, not bowls of Hulatang. Those risking their lives to rescue others, answering distress cries, and wracked with fear and anxiety are people, too, not token foodstuffs like Hot Dry Noodles, Nanjing Salted Duck, or satay noodles. This is a disaster, and if you can’t face that reality, the least you can do is not be an ass about it.

A number of Weibo users concurred with @光明处是你我归处’s post:

礼榆Stella： I don’t understand why food must always stand in for place names. Because it’s cute? Is it appropriate for the media to write headlines like this during a serious disaster? To make it cute is to dumb it down. This is the worst form of infantilized infotainment.

樺笙：I hate speaking of disasters and other serious issues by personifying food: “Hold on Hulatang, Hot Dry Noodles and Soup Dumplings are coming to help.” Content writers can make stuff like this to inspire people, but it’s inappropriate for the media. Personifications like this infantilize disasters. If the people in disaster zones are Hulatang, then what are the floods and storms? Too much broth? There are many ways to inspire people, like posting your hopes on Weibo or sharing touching videos. But when journalists dumb down coverage for the sake of more clicks they abandon linguistic rigor. The official media, whose fundamental job is to reassure people, is not only shirking its responsibility to the written word, it has become complicit in fanning the flames.

呀-粉孩儿：I feel like they’re missing something core to being human: the spirit to face disasters directly. When everything becomes infotainment, infantile, frivolous, and gamified, we don’t have to face up to any serious topics—we can just spend our days laughing or giggling at the funny bits, crying or sobbing at the touching bits.

shutupCollins：You could say things are exactly the same as during the pandemic. Looks like this year was spent in vain.

呀-粉孩儿： This sort of language pollution has intensified since last year. I see it and want to puke.

霜糖琉璃猫： Big Brother A-Zhong has nannied us into senility: turned every citizen into a giant infant. [Chinese]

Dissident cartoonist Badiucao posted his own interpretation of China’s flood rescue by riffing on a popular meme created by Russian artist Gudim in 2017. His creation satirized state-led efforts to portray disasters as moments of national greatness: 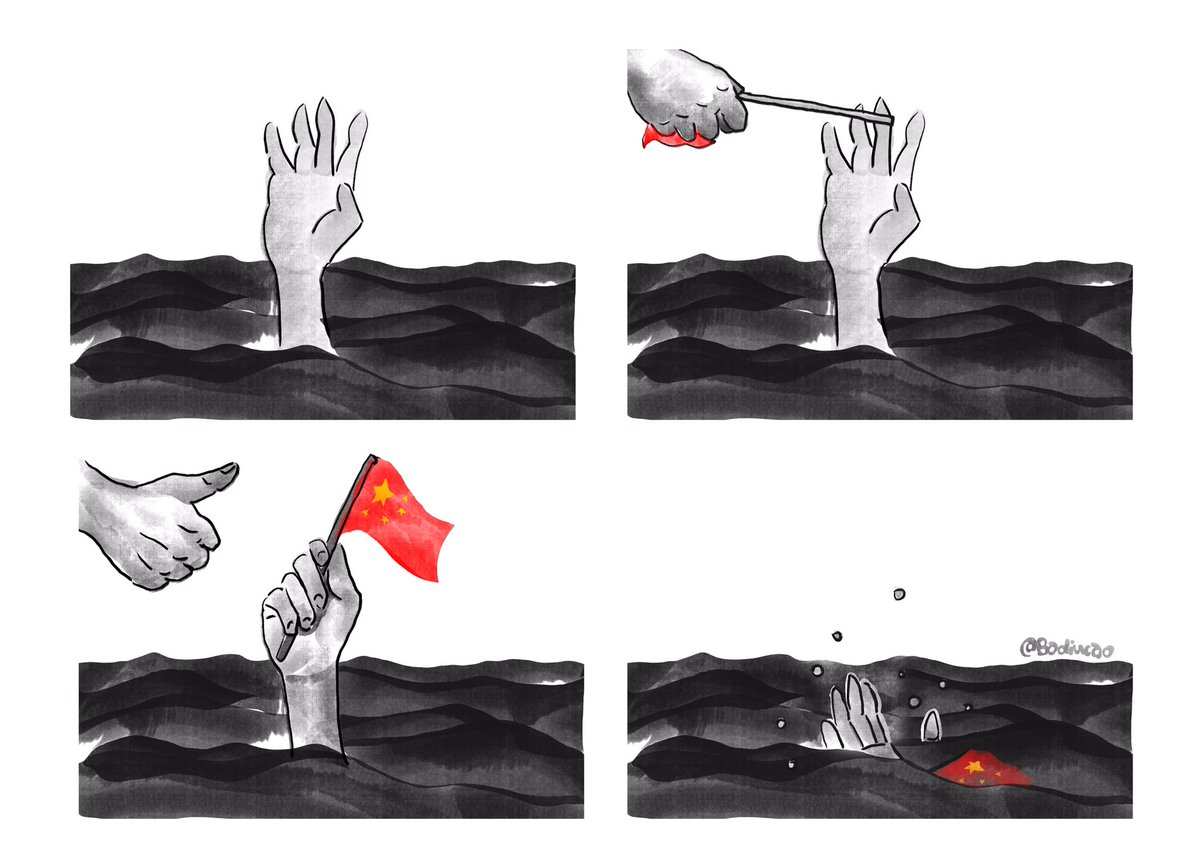 A number of Chinese internet users expressed similar sentiments, expressing anger at the conditions that allowed the flood and the rescue efforts that have followed it:

傅芮冈：Almost all the horrific scenes coming out of this rainstorm are from the city, but the place of true horror right now is the countryside. You won’t be able to see their faces, nor will you be able to hear their voices. #Henansoncein1000yearsstorm

Summer_L100： What I want to know is, where did this once-in-5,000-years statistic come from? China only has 3,000 years of recorded history. I figure they assume the more they talk up the seriousness of the natural disaster, the smaller the government’s own issues will seem: “It’s that old man in the sky who killed everyone…nothing to do with the government.” Also, those photos of advancing floodwaters don’t look like rain, but like haphazard dam releases.

insituQ：“There are mechanisms to shut down operations during storms, but they are not instantaneous. As for who has the power to shut down the subway, it’s quite possible that the subway management group [Zhengzhou Metro Group] doesn’t have it, and that they must seek higher-level approval before commencing. Shutting down the subway is a societal issue. — a municipal subway employee from a city in the south of China, who was unwilling to reveal their name

vm_cmj: What happened in Zhengzhou is the same thing that happened in Wuhan: when disaster strikes, the governmental departments have no idea what’s happening or what they should be doing, the media doesn’t know what they’re allowed to report, and everyone looks up helplessly, awaiting orders from the top. But the omnipotent higher authorities are too busy dreaming of a strong nation, and nobody dares to tell them what’s going on. And so from top to bottom, the Party-state is a nation of sleepwalkers.

Xhnsoc_Redflag： European leaders should reflect on the large-scale loss of life induced by the floods.

孟煌： Humanity’s disasters are similar in that they all involve human misfortune and the loss of life. But it is in the management of these disasters that governments reveal their differences. In an open society, people come first. In a closed society, scoring political points and allowing officials to “save face” comes first. People’s lives come second because stability is paramount.

MianMaoKu：After the Wenchuan earthquake, didn’t they establish building quality standards and increase supervision of construction projects? After the Wenzhou high-speed train crash, what did they do to avoid another similar tragedy? After the coronavirus spread, did they establish a first-response warning system for infectious diseases, rather than arresting people for “spreading rumors?” Time and again, we witness tragedies that “move the nation”; time and again, we grin through our tears to “triumph over tragedy.” When disaster strikes, average people are simply left to fend for themselves. When the next disaster strikes, the body count is certain to be even higher. [Chinese]

With contributions from Cindy Carter