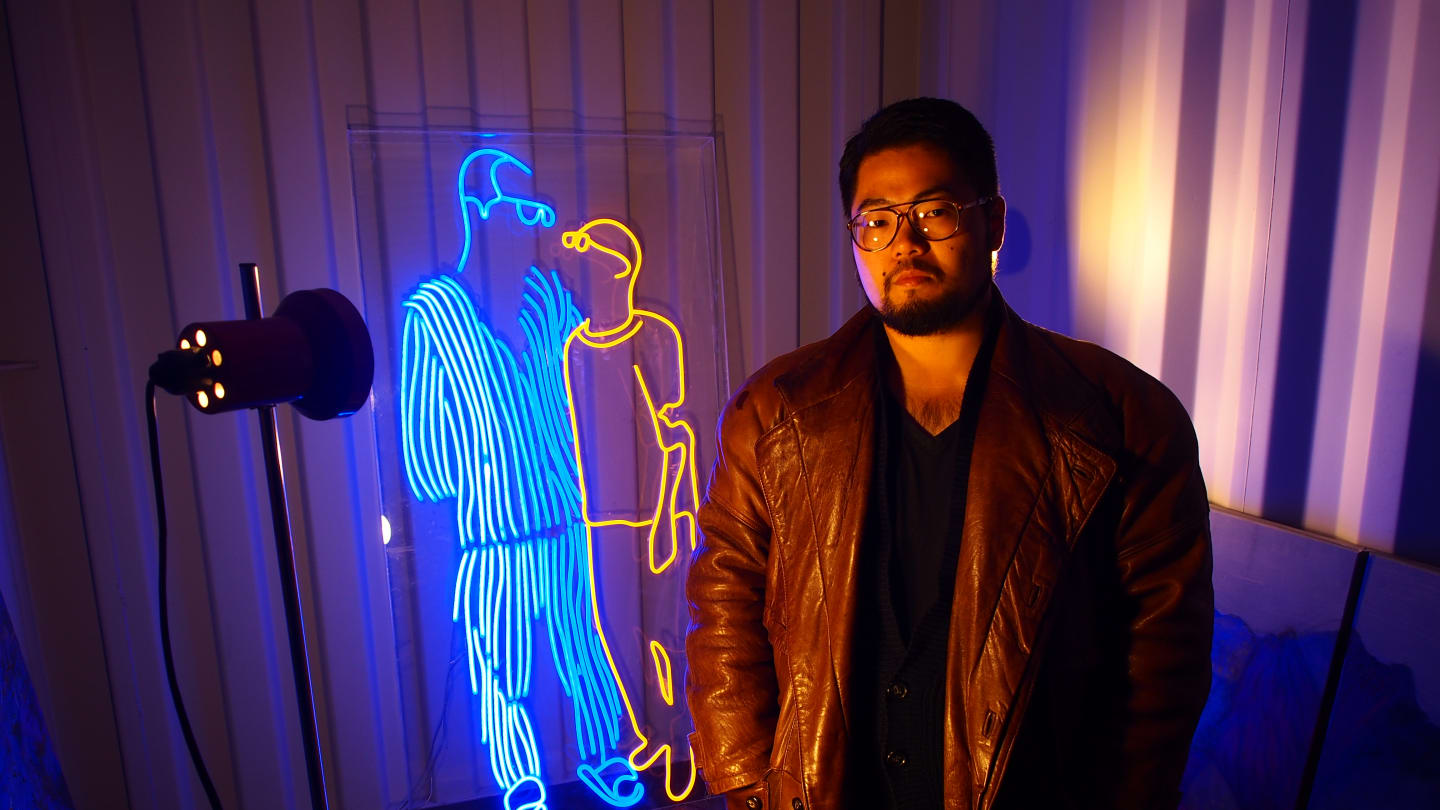 Chinese cartoonist and CDT contributor Badiucao was the subject of a documentary by filmmaker Danny Ben-Moshe, which aired on Australian TV on Tuesday night:

The film ends with Badiucao publicly showing his face for the first time. Until now, he has worn masks in public, and strictly separated his personal and creative identities in the face of online harassment and the official pressure that led to the cancellation of his first solo show in Hong Kong last year. CNN’s James Griffiths, who wrote about Badiucao in his book “The Great Firewall of China: How to Build and Control an Alternative Version of the Internet,” reported on the artist’s decision to reveal himself:

The documentary shows Badiucao receiving news that members of his family in China had been contacted by the country’s authorities. He wrestles with the decision to cancel his Hong Kong exhibition, with organizers, including Hong Kong Free Press and Reporters Without Borders, eventually taking the decision out of Badiucao’s hands, fearing for the safety of his family and show attendees.

In one of the last shots of the film, the camera pans out to show Badiucao unmasked. His hair is cropped short, and he wears round glasses and a goatee.

“They know me now, this is me,” he says, as the camera zooms in on his face before fading to black.

[…] “I want to choose the brave way,” Badiucao said. “We need dumb people to step out and see if the world is still hopeful. I’m willing to be that dumb person.”

[…] “Showing my face (is) definitely a release for me,” he said. “I don’t need to live a double identity life anymore, it also removes barriers (in) my social life, and makes it easier to develop my career as an artist.”

One thing he won’t be changing is his name. Badiucao — or Badi for short — has gotten so used to the moniker, once adopted as a deliberate nonsense term to hide his identity, that it feels more familiar than the one he was given by his parents. [Source]

To b honest，i really dont like people refer me as “China‘s Bansky”.
Will UK gov hunt and harass Bansky for its art when its identity compromised？
its boring to b a replica for others.
I am #Badiucao！！！ https://t.co/1zuDGlRgQQ

oh and i even spell its name wrong

The 30th anniversary of the June 4 crackdown this week brought a wave of accounts by young Chinese explaining how they came to learn about the events of 1989. At Star Vancouver, Joanna Chiu examined the impact on Badiucao of his own exposure to the 1995 documentary “The Gate of Heavenly Peace,” and described his subsequent work:

As a law student in Shanghai, Badiucao had never heard of the bloody crackdown. One evening in 2006, when he and his classmates were sitting around a computer to watch a flick from Taiwan, they found that a documentary had been recorded over part of it.

[…] “What happened in 1989 made me feel there was no hope to pursue being an artist or to live in a free world in China. And I saw the potential of the young people in Tiananmen and … I needed to discover my own courage,” he said in a rare series of interviews Star Vancouver conducted in-person in Melbourne and over the phone.

[…] His cartoons often co-opt the style of CCP propaganda posters to make bold statements about abuse of power and censorship. He continued to satirize Chinese President Xi Jinping with images of Winnie the Pooh after images of the character were banned on Chinese social media. Some of his work is starkly minimalist, such as a tender illustration of the late pro-democracy writer Liu Xiaobo, who was the first Nobel Peace Prize laureate to die in custody since Nazi Germany.

[…] Sophie Beach, the executive editor of the Berkeley-based China Digital Times where Badiucao worked as a contributing cartoonist, said his work stands out.

“So many political cartoons and humour in general can be impossible to translate and retain the same flavour as the original, but his images often speak for themselves. They are sharp, direct and make a strong statement just at a glance, often with a cheeky sense of humour,” Beach told Star Vancouver. [Source]

This cartoon gives you a pretty good idea of Badiucao’s style. “He speaks his truth to power in a very direct way,” says editor @CDT @sophie_beach pic.twitter.com/6Tf94z6E3a

A short clip from the BBC shows more of Badiucao’s work, as he discusses the pressure he has come under and the enduring influence of the Tiananmen protests:

The iconic “Tank Man” image from June 5, 1989 is the basis of the new documentary’s poster, which Badiucao put up in Melbourne’s graffiti-lined Hosier Lane on Monday. The alley was previously the site of Badiucao’s impromptu shrine to Liu Xiaobo following the imprisoned Nobel laureate’s death from cancer two years ago.

Hosier lane, Melbourne
The film Poster featuring #Tankman from 1989 for my #ChinasArtfulDissident is up!
Bring flowers！
Let’s make it a monument for The Tiananmen Massacre！
坦克人的海报已经在墨尔本涂鸦街Hosier Lane 完成
让我们带去更多鲜花，把它变成一个活着的六四三十周年纪念碑 pic.twitter.com/MEtfwDCrt2

While Badiucao’s focus on June 4 and Tank Man (to the extent of having the latter tattooed on his shoulder) illustrates its personal significance, learning about the events of 1989 was by no means his first encounter with political tragedy, as he explained in an interview with Foreign Policy’s Bethany Allen-Ebrahimian:

I never met my grandpa or grandma, but their lives shadowed me and also inspired me. My grandpa and his brother, my great-uncle, were famous filmmakers in China. They were very active from the 1930s to the 1950s, until the anti-intellectual movement, the “let a hundred flowers bloom” movement. Both of them got into trouble with the films that they made. My grandpa was sentenced to a concentration camp in the far west.

My grandpa died in the camp. We never knew what caused his death. It was the time of the great famine, the Great Leap Forward—the whole country was suffering from shortage of food. Most probably he died out of food and sickness. He was around his 40s when he died—my grandmother died several years later.

So political terror was in my family. My great-uncle drowned himself in the Yangtze River for the same reason, because of political persecution because of his film. They weren’t even producing dissident art, it wasn’t criticizing the government, but their films didn’t entirely fit in with the propaganda requirements.

[…] This kind of horror and tragedy hovers in my story, in my family, and now I’m repeating the same destiny as they do. But I think I’m doing it for a very good reason. [Source]

Badiucao’s work has targeted not only Chinese authorities, but those he sees as aiding them, including major U.S. tech companies. From Ryan Gallagher at The Intercept:

The coerced cancellation of Badiucao’s exhibition in Hong Kong was a stark example of Beijing’s tightening grip on the region. The event had been titled “Gongle,” a play on words about Google, based on a Chinese phrase that translates to “singing for Communism.”

[…] Prior to the planned exhibition, Badiucao had created several pieces satirizing Google’s planned censored search engine for China. He drew pictures of the company’s CEO Sundar Pichai wearing a “Make Wall Great Again” baseball cap, referencing China’s internet censorship system, known as the Great Firewall. The artist also organized a protest at Google’s headquarters in California, where he distributed some of the red baseball caps to Google employees before being moved on by security.

[…] In recent weeks, Badiucao has turned his attention to Twitter’s business dealings with China. The artist pitched a project to the social media company, offering to create a special emoji “hashflag” to commemorate the 30th anniversary of the 1989 Tiananmen Square massacre. Every time a person used the #Tiananmen30 hashtag, one of Badiucao’s emojis — such as an image of the man who famously blocked a tank during the protests — would appear beside it. Twitter wrote back to him claiming that it could only use “a limited number of emojis” on the platform and said it wasn’t interested in the collaboration.

On May 23, around the same time as its correspondence with Badiucao, Twitter hosted a “Twitter for Marketers” conference in Beijing. For Badiucao, this highlighted that while the company does not operate its platform in China because it is banned there, it still rakes in a huge amount of advertising revenue from the country — and therefore has a vested interest in staying on the Communist Party regime’s good side. [Source]

Most “hashflags” are paid ads for films, TV shows, brands, sporting events, or products including Huawei’s flagship P30 Pro smartphone. (The hashtag “#Huawei” also previously carried a corporate logo until soon after the arrest of its CFO in December.) The @HashflagArchive Twitter account has compiled some 10,500 examples since January 2018. Alongside three of Badiucao’s #Tiananmen30 hashflag designs, Gallagher posted the text of Twitter’s response, which noted that “each year, there’s a limited number of emojis allocated to the public policy team” for non-commercial uses such as elections or social movements.

Here’s correspondence from Twitter claiming it couldn’t do the Tiananmen hashflag b/c “emojis are limited resources”. Artist @badiucao offered to design one for free (see below) & said he believes Twitter is afraid of agitating Chinese companies that advertise on the platform. pic.twitter.com/b3qgizuBVa

The reference to “much consideration” suggests that the collaboration was not ruled out by established policy. AFP’s Alice Philipson reported another explanation, writing that “a source familiar with the matter at Twitter told AFP that the company did not have time to put out a special emoji for the Tiananmen anniversary, and that these are prepared months ahead of time.” It is unclear why this reasoning was not cited in the company’s earlier correspondence.

Prints, shirts, and other items featuring Badiucao’s art are available in his newly launched online store:

Check out my ART SHOP with the link. Every sharing and purchasing is a strong support for me to make more art in the future. Thxxxx & Love！#买个巴 以前碍于身份保密，不方便卖艺术周边，因为钱的流向总是会暴露隐私。现在既然站出来了，我也舔着脸求大家支持 ；）https://t.co/ylZ7fUMqIb

Another option for supporting Badiucao’s work is a donation in exchange for a copy of CDT’s ebook compiling more than 50 of his cartoons. All proceeds from the book go to the artist.