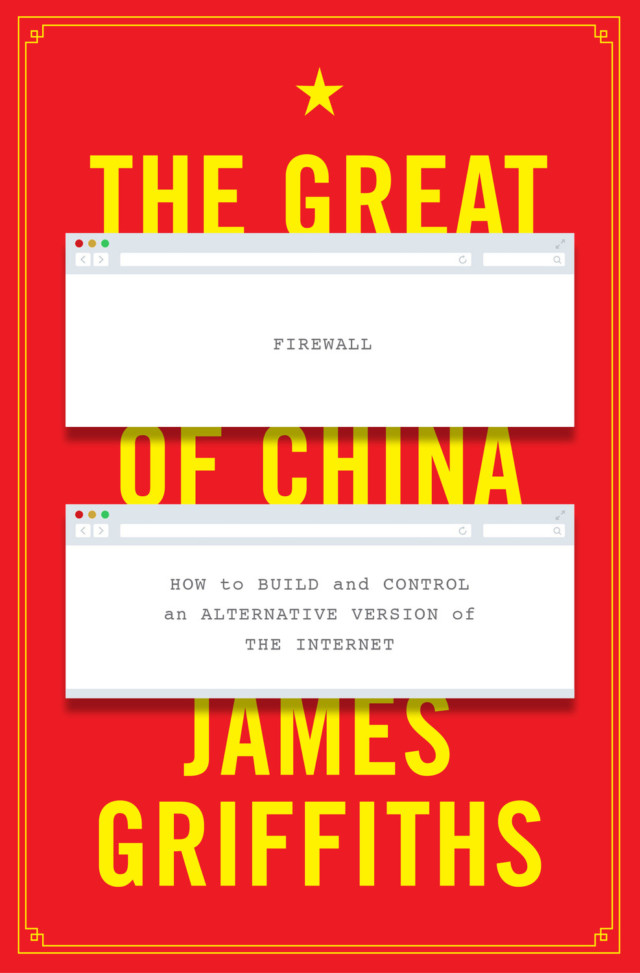 Last Friday saw the publication of “The Great Firewall of China: How to Build and Control an Alternative Version of the Internet” by CNN’s James Griffiths (previously at Shanghaiist and South China Morning Post). CDT read an advance copy, and found it a “vivid and compelling account [which] untangles the complex evolution of China’s internet controls, providing both valuable context for recent events and a solid foundation for understanding future developments.” Besides chronicling past developments within China, the book stands as the latest in a growing chorus of warnings about the expanding global reach of China’s digital controls and its role as a source of inspiration and technology to other countries.

Griffiths discussed the book on the Monocle Daily podcast on Monday (from around 34:00). The book was flagged as “New and Noteworthy” in The New York Times, and reviewed last week by Maura Cunningham for The Wall Street Journal:

Why did so many fail to anticipate that the Communist Party would extend its control over cyberspace as it had over physical space? And how, exactly, has the Chinese government created its own heavily surveilled domestic intranet? In “The Great Firewall of China,” James Griffiths traces the development of Chinese cyberauthoritarianism and censorship from the 1990s to the present. In his useful but alarming account, Mr. Griffiths, a journalist for CNN based in Hong Kong, explains why the Communist Party came to focus on internet control and how the pieces of the Great Firewall function.

What many fail to understand, Mr. Griffiths argues, is that Chinese officials censor the internet not simply to maintain a monopoly over information but, rather, out of fear of any platform with the potential to bring people together for collective-action purposes. Curbing the growth of large, organized networks is, for the ruling party, crucial to maintaining social stability and political control. “This is why even calls for rallies expressing support for government policies are sometimes censored,” Mr. Griffiths explains, “whereas a series of vituperative posts excoriating government officials for the poor air quality and accusing them of corruption might not be.”

[…] “The key danger of the Great Firewall,” Mr. Griffiths writes, “is that, by its very existence, it acts as a daily proof of concept for authoritarians and dictators the world over: proof that the internet can be regulated and brought to heel.” This is an attractive prospect for other world leaders, who have already begun to follow China’s precedent. In Russia, for example, Vladimir Putin has clamped down on the country’s once-vibrant internet, and in India, Narendra Modi’s government has recently proposed increased online regulation. The Chinese government has already proved the techno-optimists wrong: It is possible to control the internet. Now, the Great Firewall could easily become the next major Chinese export. [Source]

Another favorable review came from Yuan Yang at The Financial Times:

China has been mounting a concerted attack on freedom of speech online for over two decades. For most non-Chinese contact with Beijing’s censorship controls, typically occurred, if at all, on trips to the country where lack of access to Google or Facebook is a routine and frustrating experience. But in recent years China’s attacks on internet freedoms have expanded beyond its borders, as the Hong Kong-based journalist James Griffiths writes in The Great Firewall of China.

Chinese state-sponsored hackers, he writes, have temporarily brought down GitHub, extensively phished Tibetans in India, and according to US indictments allegedly stolen business secrets from American companies. Moreover, China has lobbied for its vision of cyber sovereignty and a walled internet internationally and helped Russia as well as Uganda build its internet controls. Those concerned about digital rights in the west would do well to heed Griffiths’ warnings that China’s system of internet censorship is not for internal consumption only but is being exported as part of a campaign by Beijing to legitimise its approach to the world.

[…] In a slightly rushed epilogue, Griffiths concludes that the capitalists of “Silicon Valley won’t save you”, but nor can western governments (sometimes hypocritically) propounding the virtues of a free internet abroad, given the suspicion that governments such as China’s attach to anything the US defends. Instead, what we need is a “user controlled, transparent and democratic internet”, Griffiths concludes. Writing this in Beijing, struggling to send even this review outside the Firewall, I lose sight of what that looks like. [Source]

Please read this book review by me purely for the human labour embedded in it: it took several colleagues & a team of VPN engineers working evening shifts to get it out of China during the National People's Congress. Then, read the book by @jgriffiths! @FT https://t.co/XYZiugR4oE

Hong Kong Free Press’ Jennifer Creery also focused on Griffiths’ coverage of the role of Western companies, and his comments on more recent developments on this front such as the revelation and supposed abandonment of Google’s plans to return to China with “Project Dragonfly“:

The book, set to be released on Friday, is an exhaustive account of the development of the internet in China over recent decades, from its humble origins in a Beijing laboratory in 1987, to the colossal infrastructure it has become today. Griffiths, a journalist who has spent several years in China, carefully dissects the events that have led up to the current model of censorship in China: crude, fragile, and remarkably effective.

But while The Great Firewall provides an account of the past, it also serves as a stark warning for the future of internet control, one that extends beyond the firewall and across the world.

[…] “I think what freaked people out about Dragonfly was a very good example: these are the types of compromises that a company like Google would have to make to get into China. And I think they probably would’ve have been prepared to make more compromises,” Griffiths explained. “That’s why I push back against people when they talk about companies like Facebook and Google going into China.”

In spite of restrictions, large Western companies continue to make efforts to enter China – the New York Times reported last month that Facebook had partnered with a local Shenzhen-based company to build its local presence through advertising on its platform, despite having been blocked in 2009.

“There is no way Facebook as we currently recognise it would exist in China,” Griffiths warns. [Source]

The Great Firewall of China is a riveting read, revealing the questionable acts of states and corporations as they vie to shape the internet to their own ends. And Griffiths has an eye for the detail that brings anecdotes to life. Many of his stories show how offline and online lives merge in bizarre ways.

[…] Griffiths is good at calling out the hypocrisy of tech companies, including Google and Twitter, that espouse one ideology in Silicon Valley and another when talking to oppressive regimes. “No company has been more shameless in its attempts to woo Beijing than Facebook,” he writes. “Founder Mark Zuckerberg has posed for photos running in the Beijing smog, given employees copies of Xi Jinping’s The Governance of China, and even reportedly asked Xi to name his first child (Xi declined).” [Source]

An excerpt at MIT Technology Review in January also focused on the international side of Griffiths’ account, including his coverage of long-running cyberattacks on the Tibetan diaspora, the 2014 OPM hack, 2015 bombardment of GitHub, and last year’s pressure campaign against Marriott and other Western companies. Another excerpt at the L.A. Review of Books on Friday demonstrated some of the book’s more China-focused core narrative, describing the late ’90s Da Cankao email newsletter of censored news, and the trial of “China’s first internet dissident” in 1999:

For those who received it willingly, Da Cankao could be revelatory, opening their eyes to a world of dissident thought and alternative sources of information they never knew existed. Zhao Jing, who would go on to become a famous dissident writer himself under the pen name Michael Anti, was 23 when he first received a copy of the newsletter, in 1998. He was living in Nanjing, a large but still somewhat provincial city in eastern China. “It was like a culture shock,” Zhao told me. “I thought, ‘Oh my god,’ all this news is very sensitive.” Before discovering Da Cankao, he knew almost nothing about Chinese politics, beyond what was in state media, which contained no critiques or debate. “Suddenly you see there’s this discussion going on. It really opened your mind.”

The name of the newsletter harkened back to the turmoil of [founder Li Hongkuan]’s childhood in the 1960s and 1970s. Classified reports had always been written for the country’s top leadership, filed in secret by state media reporters across the country, giving a critical view of goings-on that would never be permitted in the newspapers they normally filed for. Outside the privileged world of those who received the uncensored reports, they were known as the da cankao, or “big reference.” The nickname was derived from Cankao Xiaoxi, a newspaper collating foreign news reports that was available only to Party members, and known popularly as “little reference” (xiao cankao). During the Cultural Revolution, normal communication networks broke down, and the da cankao reports became one of the few remaining reliable sources of information. Tidbits would seep out to the general public through the children of senior officials, who would sneak a look at their parents’ briefings and tell their friends of the chaos spreading around the country.

For Li, the name was also a way to insult the old men in charge of the Party, who needed their reports printed out in extra-large type. “For my generation, whoever experienced the Tiananmen massacre, we all hated the government,” he told me. [Source]

Update (March 20, 2019, 10:20 PST): A new passage adapted at The Atlantic includes Griffiths’ account of “Weibo’s brief period as a genuine platform for discussion and dissent, [when] microbloggers did actually achieve real change. They helped rescue kidnapped children and reunite them with their families; they helped expose corruption and abuses of power; and, most importantly of all, they helped force China to begin to confront the country’s endemic air pollution.”