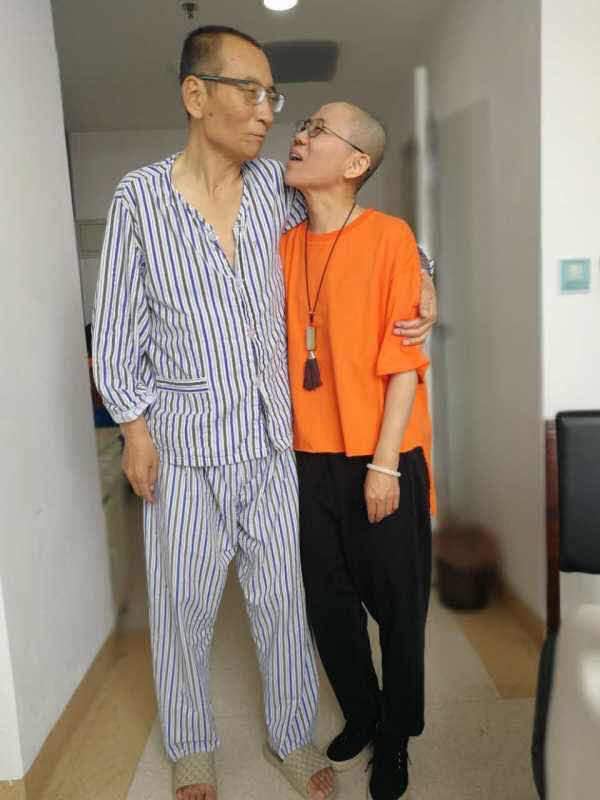 Ailing Nobel Peace Prize laureate Liu Xiaobo remains in the First Hospital of China Medical University in Shenyang, though his exact condition has been the subject of conflicting reports from the hospital and foreign doctors invited to treat him. While Liu’s family and friends, and Liu himself, have expressed hope that he will be allowed to travel abroad to receive medical treatment for his terminal liver cancer, authorities have said that he is too frail to be transported abroad. Two visiting doctors, Joseph M. Herman of the University of Texas MD Anderson Cancer Center and Markus Büchler of the University of Heidelberg, subsequently issued a statement saying that Liu could and should be transported abroad for further treatment, and offering care at either of their facilities. Javier C. Hernandez and Chris Buckley report for The New York Times:

“While a degree of risk always exists in the movement of any patient, both physicians believe Mr. Liu can be safely transported with appropriate medical evacuation care and support,” the doctors said in a joint statement. They added that they were willing to provide Mr. Liu such care.

Shang Baojun, a lawyer who represented Mr. Liu at his trial in 2009 on charges of state subversion, said by phone, “He said his first preference would be Germany, but if that wasn’t workable, then the United States would be fine, too.”

[…] Mr. Liu’s condition appears to be rapidly deteriorating. Dr. Herman and Dr. Büchler concurred with Chinese experts who said in May that Mr. Liu has primary liver cancer. They said that additional treatment options might exist, such as radiotherapy. They also said they recognized the “quality of care” that he had been receiving in China. [Source]

A video leaked from the hospital showing the doctors at Liu’s bedside and speaking with their Chinese counterparts has been used by Chinese state media to make the case that Liu is getting sufficient care in Shenyang and does not need to be transported abroad:

However, the German Embassy in Beijing issued a statement decrying the leaked video:

German embassy in Beijing has just released this about 'selective leaking' of #LiuXiaobo images by security organs to state media outlets pic.twitter.com/jIRXuq12Qo

After the release of the doctors’ statement and the video, the hospital treating Liu said he was in “critical condition” and could not be moved abroad. From Steven Jiang at CNN:

A statement released by the hospital where Liu is being treated for liver cancer described his worsening symptoms and condition, quoting his medical team — composed of prominent Chinese oncologists — as saying he is not suited for invasive procedures or radiation therapy.

“The doctors suggested close monitoring of the patient’s blood pressure, correction of low blood pressure level, active anti-infection therapy and blood purification,” the statement said, adding that Liu’s family has been informed of the team’s opinion.

[…] Before the hospital issued its latest statement, a Chinese foreign ministry spokesman on Monday repeatedly declined to say if Beijing would allow Liu to leave the country.

“We hope relevant countries will respect China’s judicial sovereignty and not use a so-called individual case to interfere in China’s internal affairs,” said Geng Shuang at a regular press briefing. [Source]

Meanwhile, amid the confusion over Liu’s medical condition, his friends and supporters are continuing to call on the government to release him and allow him to leave China, as Tom Phillips reports for the Guardian:

Patrick Poon, another Amnesty International activist, said Chinese authorities could no longer justify preventing Liu from leaving China. “China will forever be criticised for its cruelty to the Nobel laureate if it still denies his wish to leave the country.”

Ye Du, a poet and friend, said Liu’s wishes needed to be urgently respected. “However, what is most likely to happen is that Liu Xiaobo will die in the hospital because of the Communist party’s constant authoritarian stance.”

[…] In an open letter drafted by his friend, the activist Ai Xiaoming, supporters said it was “abundantly clear” that the Chinese hospital where Liu was being held had exhausted its treatment options. As a result he should be allowed to seek treatment abroad, the group argued.

“Even though Liu Xiaobo is still a prisoner of this country, even though he’s nearing his death, his heart is still beating and his soul longs for freedom. He has made the final choice for his life: leave this prison and experience freedom,” the group wrote. [Source]

Germany-based writer and friend of Liu, Liao Yiwu, wrote an open letter supporting Liu’s wish to go to Germany to live out his final days:

[…] [Liu Xiaobo will] soon be dead, but his final wish is still to come to Germany! I know his wish is to use the last moments of his life to see his wife and her younger brother safely delivered to free Germany.

Nearby my home is Germany’s best cemetery with a lake populated by waterfowl in the middle of it. He can be buried here and Liu Xia and me and my family can visit him often, and later, can even be buried here ourselves.

Please pass on our thanks for her efforts to Chancellor Merkel from my little girl, her mother and me. Yet I’d still like to know whether Liu Xiaobo’s final wish will be realized? Moreover, the US government has already declared the hope that the Chinese government will satisfy this desire of Liu Xiaobo and his family as quickly as possible for humanitarian reasons. The US government is willing to do all within its power, including dispatching a special plane to rescue Liu Xiaobo, Liu Xia and Liu Hui.

Germany? Now at this final juncture, we would like to know the results of the mediation between Madam Merkel and Xi Jinping.

Our whole family would like to see you all!!!

Love to you all,
Yiwu

Artist Ai Weiwei, who also now lives in Germany, called on the Chinese government to release Liu in an interview with the Guardian’s Tom Phillips:

“I think the government should release him. This is a historic mistake,” Ai told the Guardian from Berlin, where he now lives.

“The government should just release him and have a better record – because this is going to be remembered by the whole world … what they are doing.

Human rights activists have expressed concern that the authorities’ treatment of Liu is indicative of a strategy in dealing with imprisoned dissidents: withholding medical treatment in prison and thereby imposing a de facto death sentence. From Javier C. Hernandez at The New York Times:

Accusations that Liu Xiaobo, the imprisoned Nobel Peace laureate who has late-stage liver cancer, has not received proper treatment have brought new scrutiny to what human rights advocates say is a pattern in Chinese prisons: the denial of health care to dissidents to intimidate and punish them.

At some prisons, requests for health checkups and medicine are refused, human rights experts and former prisoners say. At others, ill prisoners suffer physical abuse and malnutrition. In some cases, chronic ailments and serious diseases are left untreated, or medical care is repeatedly delayed.

“There is a real fear amongst prisoners of conscience and their families that authorities aren’t afraid to let them die from lack of adequate medical care,” said Frances Eve, a researcher at Chinese Human Rights Defenders, a coalition of advocates. [Source]

China legal scholar Jerome Cohen commented on this fear as a motivating factor for Liao and other friends of Liu’s in encouraging his emigration at this stage in his life:

Liao Yiwu himself is a splendid writer and also a poet. He is alive and active today because, after enduring harsh punishment in China, he made the decision to go into exile in Germany and, like the Chinese who assembled in Washington, DC and other places outside the Mainland July 9th to mark the second anniversary of the start of Xi Jinping’s continuing 709 purge of human rights advocates, he is free to express his views.

The dissimilar fates of Liao and Liu Xiaobo illustrate the painful choice (if they have that choice) that has always confronted civil libertarians from dictatorial regimes – exile or extermination. Ninoy Aquino, Kim Dae-jung, Annette Lu, Ai Weiwei, Chen Guangcheng and so many others have earned our sympathy and support, whatever their ultimate decision. [Source]

German Chancellor ­Angela Merkel has also called on President Xi for leniency in Liu’s case. See also an open letter to Liu by New York Times journalist Nicholas Kristof, who got to know him during the 1989 student protest movement and calls him “the Mandela of our age.”

Read 13 years of coverage of Liu Xiaobo, via CDT.

(Translation of Liao Yiwu’s statement was provided by Liao.)