Half of China’s Moms-To-Be Have C-Sections

The Associated Press reports on a WHO survey that states half of Chinese pregnancies are delivered during C-sections: 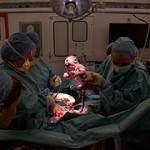 Rates of C-sections have reached “epidemic proportions” in many countries worldwide, the WHO said in a report surveying nine Asian nations. After reviewing nearly 110,000 births across the region, it found 27 percent of women sampled were giving birth under the knife, partially motivated by hospitals eager to make more money… “So many pregnant women ask for a cesarean birth in China, but we always suggest that they have a natural birth,” said Dr. He Yuanhua, at Capital Antai Obstetrics and Gynecology Hospital in Beijing, who did not participate in the study. “It’s bad to have so many cesarean births because natural birth is the ideal way.”

… Women undergoing C-sections that are not medically necessary are more likely to die or be admitted into intensive care units, require blood transfusions or encounter complications that lead to hysterectomies, the study found. The procedure was shown to benefit babies during breech births…In Asia, some women opt for the abdominal surgery to choose their delivery day after consulting fortune tellers for “lucky” birthdays or times. Others fear painful natural births or worry their vaginas may be stretched or damaged by a normal delivery. Some women also prefer the operation because they believe it is less risky.

In this CDT post from 2007,  Xinhua reported that C-sections were performed in half of the deliveries because “‘Caesarean sections earn doctors higher profits so doctors tend to persuade pregnant women to have a caesarean…’”