ESWN translates a report about a propaganda official from Yunnan who was welcomed to a talk at a university with a shower of fifty-cent notes:

This afternoon, Yunnan Province Party Committee Publicity Department deputy director Wu Hao came to the Renmin University Cisco Live Broadcast Studio to give a talk to the School of Journalism. After the host gave a short introduction, Wu Hao stepped onto the podium. Before he even said anything, a man about 25-years-old walked up to him, took out a wad of fifty-cent bills and threw it at him. The man also yelled: “Wu Hao, wu mao!” Then he walked out of the studio. Workers picked up the bills afterwards. “Wu mao” refers to the mythical pay that a commentator receives for each Internet post/comment made according to government instructions.

The man who threw the money is Wang Zhongxia. He said that he is a Renmin University graduate. Earlier today, he got 30 yuan’s worth of 50 cent bills from his bank “in order to salute Mr. Wu Hao.” 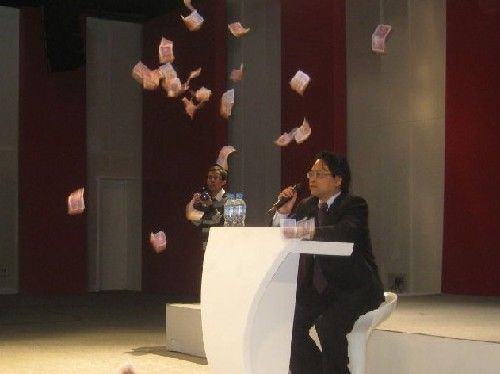 Translation: Zhao Country and the Bankruptcy of Patriotism

Pu Zhiqiang: Guilty in the Court of “50 Cent” Opinion