Translation: Zhao Country and the Bankruptcy of Patriotism 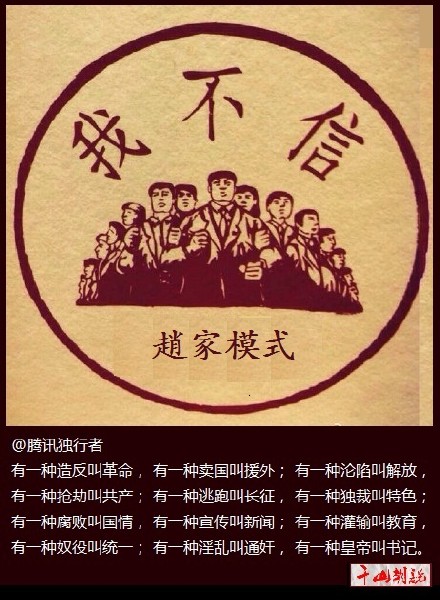 A novella published more than 90 years ago critiquing the social rot of late imperial China has found new meaning for netizens. In Lu Xun’s “True Story of Ah Q,” the titular anti-hero tries to associate himself with Young Master Zhao, only to be pushed away. The line “Do you think you’re worthy of the name Zhao?” is now applied to volunteer fifty centers, people who write pro-government online commentary of their own volition. Online discussion of the “Zhao family” became a powerful criticism of entrenched political and economic power. As Mo Zhixu explains at China Change, the “Zhaos” are “the direct descendants of the generation of Chinese Communist Party leaders who established the communist system.”

Blogger Xiyu Xuefan explains how looking at China as “Zhao country” sheds light on the true nature of power, and offers a way to change the status quo.

Deconstructing Family and Country: The Bankruptcy of Patriotism in “Zhao Country”

As a country of powerful officials, it’s an indisputable fact that China is practicing bigwig capitalism. It’s been years since the name “Celestial Empire” replaced “China.” A deconstruction that serves as a redefinition must always come close to the essence. Recently, there’s also been the expression “your country,” which is the kind of demarcation that gradually creates distance. In short, fart people are at odds with this country’s identity, no matter if you call it New China, the republic, our country, or the motherland.

The benefits paid out after the death of farmer Xu Chunhe demonstrated how difficult, disappointing, violent, and costly it can be for a country’s “underclass” to demand its rights. Education, medical treatment, retirement, and housing are four huge mountains to the ordinary citizen, and those mountains can crush them. Recently, a rural girl with good grades in her second year of high school committed suicide by jumping off an overpass because she was hungry. An ordinary woman who couldn’t afford to seek medical treatment guiltily gave way to her illness. Left behind children commit joint suicide. Capsizing, exploding, collapsing… On one hand, calamity rains down on ordinary citizens, and on the other hand, the Big Guy is out seeing the world and spending money. The Red Empire looks a lot like the Celestial Empire of the Qing. It’s as if they’re all abiding by the royal teaching that one should “prefer the company of foreign countries over domestic slaves.” Otherwise, there wouldn’t be talk on the street of how “the U.S. can use China’s money, Africa can, South Korea can, the government can, the officials can, the rich second generation can, and the mistresses can; it’s only the common people who can’t use it.” But while “Celestial Empire” may fit the current dynasty, it’s from the Qing. In this age where reality is bigger than imagination, using something just once dooms it to transience.

Downstairs from my home is a nursery school franchise. Every day when it’s time to raise the flag, I hear this kind of mania: “I love China, I love the five-star red flag ….” This isn’t unusual. Patriotism is a lifelong process of brainwashing that starts from infancy. Thus, love of country is equated to love of government, and tyrants are really great liberators. The inability to distinguish between despotic totalitarianism and universal democracy, common sense and heresy, human rights and sovereignty, is the result of brainwashing. Even so, whatever is forcibly implanted, the concepts that accompany this indoctrination can only be violent, coercive, and false. They confound black and white, they rape the truth. But as soon as the truth slips out, it will be deconstructed, and endlessly deconstructed, until it is put back together.

Patriotism is the first victim of rape. To whom does the country belong? If a country has no civil liberties, to whom can it belong? Just as Great Ancestor Mao said, “That which is fake is fake. The disguise should be stripped away.” Currently, the new term “Zhao Country” is an excellent deconstruction of our country, the republic, and New China. Deconstruction is the dismantling of something to reveal its true essence. “Zhao Country” comes from Lu Xun’s “True Story of Ah Q,” in which the young Master Zhao passes the imperial examination at the county level, and Ah Q also wants to boast a bit. He immediately gets a slap on the face from old Master Zhao, who says, “Are you also worthy of the surname Zhao?”

The master’s household and country will categorically forbid a slave from taking a cut of its ill-gotten gains. Otherwise, Empress Dowager Ci Xi could have made it a national policy to “prefer the company of foreign countries over domestic slaves.” The Big Guy’s ceaseless scattering of money appears to have the same origin. Wang Shi’s recent anger over the purchase of thousands of shares by Baoneng’s Yao Zhenghua is the result of the inertia of the master and his power. In the past, business was a matter of you selling and me buying. There was a contract and a transaction, and it was fair and reasonable. But even so, if you were from a family that sold produce, and you wanted equal footing with me, suddenly anger would arise in the Wang Shis of the world, who represent the influential. You thought that because you have money now, you could assume the surname Zhao? Ha! In the eyes of the red bigwigs, slaves are slaves, lowly slaves. And it’s like Captain Bo’s disdain for Xu Ming. What position does Xu Ming have, and position do I have?

The saying “we are the successors of communism” has gone viral. Busybodies ask the question, when will our succession take place? Hehe, that’s a question to ask Heaven. When it’s your turn for succession, will you also be worthy of the surname Zhao? There’s no need to mention that positions serving the renminbi are scarce. It’s a red latrine full of people squatting. When patriotism was considered a concept of devotion, no one was denied access to it, but as soon as it became an appeal for profit, it could only be a weapon in the hands of the powerful. All the powerless fart people are the meat on the chopping board. Patriotism—“love for the cooking pot”—is a joke for willing fools. Someone else can dupe you, but if you believe it, you’re a real idiot, because your surname isn’t Zhao. The house belongs to the Zhaos, and so does the country.

The “love for the cooking pot” dream of volunteer fifty centers, and all ordinary citizens, should be put to rest. Deconstructing “love for the cooking pot” to reveal Zhao Country could be called a total overhaul. This is an inspired work of borrowism, where creativity has deconstructed something limitlessly, to the point where it comes very close to its true appearance. The fifty centers who say, “if you aren’t a patriot, get out of China” are dejected slaves earning their measly fifty cents. Passing yourself off as a master is categorically unsuccessful: “Are you also worthy of the surname Zhao?” As soon as this is raised, these dog-like slaves surrender their weapons. This dynasty, when deconstructed using the Zhao Country method, could be overhauled, and all the fakery would end as bridges go back to being bridges, roads go back to being roads, the Eight Banners go back to being the Eight Banners, the slaves go back to being the slaves, the fart people go back to being the fart people. This would also put the halo back over patriotism. Just as the slaves of the Qing Dynasty couldn’t say “my great Qing” but instead had to say “your great Qing,” Zhao Country, and the industries of the people of Zhao Country, would already be demarcated. As with the separation of a natural moat, the powerful would be clearly distinguished, and just like that, the dust would settle in the most remarkable and definitive way.

I Don’t Believe in the Zhao Family Model

There’s a type of rebellion called a revolution,

there’s a type of betrayal of country called foreign aid;

there’s a type of capture by the enemy called liberation,

there’s a type of retreat called the Long March,

there’s a type of despotism called a characteristic;

there’s a type of emperor called a secretary. [Chinese]