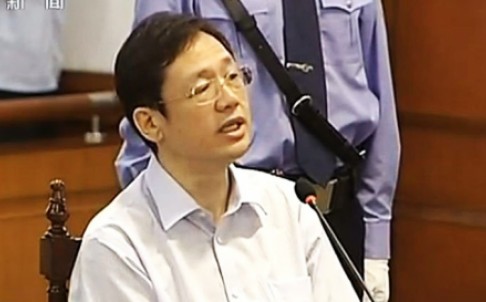 Regarding former Dalian Shide Group chairman Xu Ming dying of illness in prison, all websites nationwide must strictly adhere to information from central news media. Do not hype the story or independently report without permission. Pay attention to and delete online comments attacking the central leadership. (December 16, 2015) [Chinese]

Reuters reports that Dalian Shide Group founder Xu Ming died in a Wuhan prison on December 4, reportedly due to health complications. Xu was a close business ally of Bo Xilai, the former Chongqing Party chief who was sentenced to life in prison in 2013 for corruption charges. Meng Meng and Benjamin Kang Lim report for Reuters:

Xu had heart problems and died at a penitentiary in Wuhan in central Hubei province, the Tencent website reported, quoting a former company executive.

The trial of Xu, listed by Forbes as China’s eighth-richest person in 2005, had been shrouded in secrecy. It was never made public when he was arrested, indicted and convicted. His prison term was unknown.

Xu was scheduled to be released from prison in September 2016, Phoenix television said.

Xu’s relationship with Bo became a focus a few years ago when the politician was probed for corruption.

Chinese sources have reported that Xu Ming died of a heart attack.

Xu was arrested in March 2012 for economic crimes and sentenced to four years in prison. During Bo Xilai’s 2013 trial, Xu admitted that Bo may not have had direct knowledge of the bribes he provided to Bo’s wife Gu Kailai and son Bo Guagua, information that censorship authorities at the time sought to keep in the shade.

At the South China Morning Post, Keira Lu Huang reports that close associates of Xu’s were surprised by the death, and unaware that he had heart problems:

Prism, an investigative website operated by Tencent, said Xu’s ashes were handed over to his family in Dalian yesterday. A short memorial service was held before the ashes were interred.

The Prism report cited a senior Shide manager and sources close to Xu’s family as saying that his death was a shock.

The manager said he had never heard of Xu having a heart problem. [Source]

The New York Times’ Michael Forsythe further details the political relationship between Xu Ming and Bo Xilai that began during Bo’s time as mayor of Dalian in the 1990s:

A multimillionaire before he turned 30, and a billionaire shortly after, Mr. Xu’s most prominent political patron was the mayor of Dalian, Bo Xilai, whose government in the 1990s gave the young businessman lucrative contracts to beautify the city. Mr. Xu’s Shide Group expanded into building materials and real estate and in 1999 bought Dalian’s championship soccer team from the city’s other powerful and politically connected businessman, Wang Jianlin, the chairman of Dalian Wanda Group.

Mr. Xu’s fortune swelled as Mr. Bo rose through the ranks of the party’s leadership. He became China’s eighth-richest person in 2005, according to Forbes, and focused many of his investments on the country’s growing insurance industry.

[…] Mr. Bo’s downfall in March 2012 was quickly followed by Mr. Xu’s own detention, under circumstances that have never been explained by the authorities. When Mr. Bo was indictedin 2013, prosecutors charged that he had received millions of dollars in payoffs from Mr. Xu, including a villaon the French Riviera. Mr. Xu was also accused of paying for extravagant trips for Mr. Bo’s son, including one to Africa.

Yet Mr. Xu maintained close ties to many prominent leaders, including rivals of Mr. Bo. In Beijing, Mr. Xu shared an office floor with the wife of former Prime Minister Wen Jiabao, and was a co-investor in several businesses with Wen family members. Close associates said he had dated Mr. Wen’s daughter, Wen Ruchun. [Source]