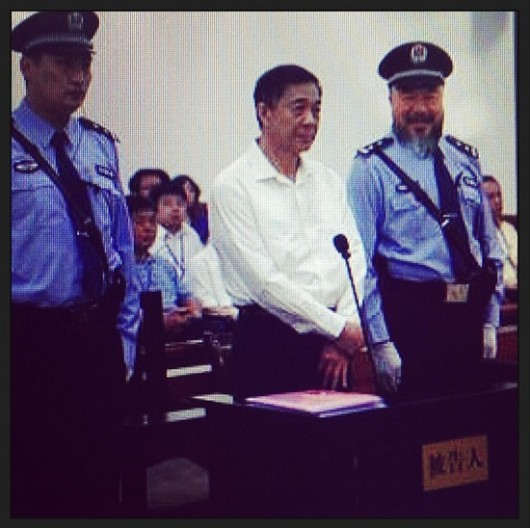 Central Propaganda Department: Regarding coverage of Bo Xilai’s hearing, headlines cannot express anything of benefit to Bo, such as his “20 questions” questioning of Xu Ming in court. (August 23, 2013)

In a string of questions during cross-examination, Dalian billionaire Xu Ming admitted that Bo may not have had direct knowledge of the expensive bribes with which Xu plied Bo’s wife, Gu Kailai, and his son, Bo Guagua.

State Council Information Office: Web portals are requested to post the following two articles on both homepages (that of the portal itself and of its news center): “Scoundrelry and Sophistry: The Ultimate Insanity of Hypocrisy” from China.org.cn, and “Listening to the Wind: Opening Day of Bo Xilai Trial Shows Complexity and Difficulty of the Fight Against Corruption” from the CCTV website. Carry this out immediately. (August 23, 2013)

China.org.cn is a government portal run jointly by the State Council Information Office and the China International Publishing Group.

Follow CDT’s Bo Xilai Trial liveblog for updates and background on the case.