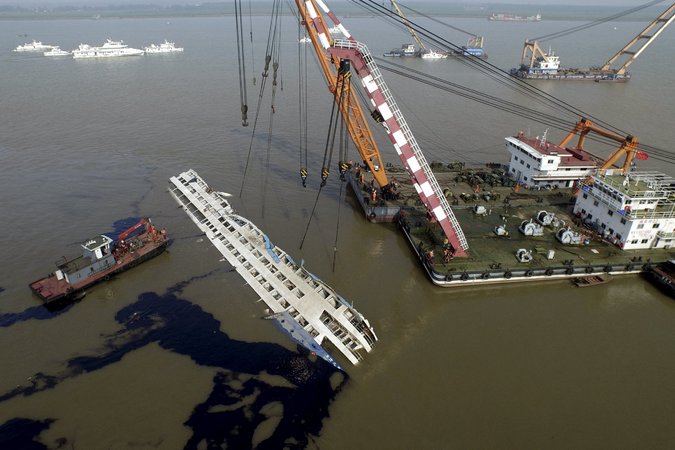 According to the findings of an official investigation, bad weather was primarily to blame for the June cruise ship disaster on the Yangtze River that killed 442 people, most of whom were elderly vacationers. From Xinhua:

The cruise ship Eastern Star encountered the squall line during a trip from Nanjing to Chongqing on the night of June 1, and a downburst, instead of a tornado as reported previously, produced strong winds that overturned the vessel, the report showed.

In a very short time, winds reached level 12 to 13 on the Beaufort scale while rainfall rose to 94.4 millimeters per hour, forcing the ship to capsize within just over a minute, according to the report.

The captain took measures to stabilize the vessel, but the wind force was more than double the maximum level the ship could take, investigators found.

[…] Investigators found that the ship’s ability to resist wind pressure conforms to regulations but was not strong enough to stand the extreme weather, according to the report. [Source]

The inquiry into the disaster found that poor crew response and oversight by officials and regulators also contributed to the tragedy. Chris Buckley at The New York Times reports:

“The captain and first mate on duty had insufficient knowledge of extreme weather and its risks,” the report said. “They never issued a distress message, did not issue a warning to the whole ship, and did not organize steps to abandon ship and disperse passengers.”

The inquiry said that Mr. Zhang should be stripped of his captain’s license and investigated for possible crimes. The first mate, with whom it also found fault, died in the sinking.

The investigators also recommended administrative penalties against seven managers of the Chongqing Oriental Ship Company, which operated the Oriental Star, and 36 government and Communist Party officials deemed to have fallen short in supervision and inspections. They also recommended firmer restrictions on passenger ships sailing on the Yangtze River in poor weather. [Source]

At The Wall Street Journal, Chun Han Wong reports that some of the victims’ relatives were not satisfied with the outcome of the official investigation. Many believe that more needs to be done to address the human error responsible for the deaths of their loved ones:

Some victims’ relatives criticized the report, saying it didn’t sufficiently address their concerns about the role of human error in what they deemed to be a man-made disaster. “We are bitterly disappointed,” said Stella Wu, a Shanghai resident whose mother died in the sinking. “But we have nowhere to go, no one to complain to.”

In the days after the sinking, victims’ families bristled against the government’s efforts to control information about rescue and investigation efforts. At the time, many relatives questioned early official accounts that blamed bad weather for the disaster, including now-discounted reports of a tornado, and they demanded a thorough investigation into human factors. [Source]

The capsizing of the Eastern Star is one of a series of accidents that struck China this year as a result of lax safety regulations. In August, deadly explosions occurred at a toxic chemical storage site in Tianjin, killing more than 170 people. Earlier this month, a construction dumpsite collapsed in an industrial park in Shenzhen, burying dozens of buildings.

Drawing the News: Li Keqiang on Scene at the Yangtze