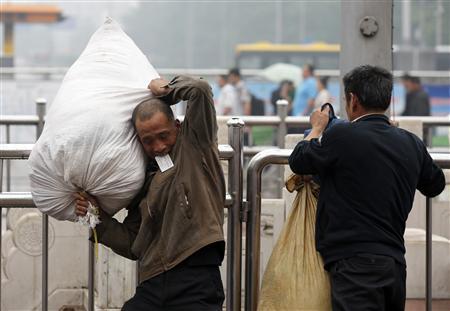 Following an apartment block fire that left 19 dead and eight injured in Beijing this week—found to have been started by an illegally-built basement refrigeration storage area—authorities have launched a “40-day city-wide safety check” targeting unlicensed rental accommodations. Immediately after the fire, censors demanded that all media follow the official line when reporting on the incident. The crackdown has already resulted in thousands of short-notice evictions. At Reuters, Yawen Chen, Irene Wang, Joseph Campbell, and Gao Liangping report on the ongoing crackdown, which is forcing many migrant workers out of their lodgings in basements and warehouses:

The crackdown has forced many migrant workers living in basements and warehouses to pack up and leave, media reported, while a flurry of logistics and delivery companies have been hit by emergency rules that closed some warehouse centres.

[…] Inspectors said it has been a “cat-and-mouse chase” as many illegal landlords had ignored warnings. But this time, the punishment would be “most severe” in solving the problem once and for all, according to CCTV.

Dozens of people were seen leaving one of the apartment blocks, in Beijing’s Tongzhou district on Thursday, when Reuters visited. Forced evictions in the district have been reported.

[…] The capital has been sanitising its hutong alleyways, home to millions of migrants workers and thousands of small businesses, bulldozing illegal constructions and forcing shops, bars and tiny courtyard restaurants to relocate or close. [Source]

At Caixin, Li Rongde reports further on the crackdown, noting short notice evictions and anxiety among migrants in the capital city and suburbs:

Authorities say they have identified three types of buildings prone to potential safety hazards for “inspection, cleanups, upgrades or closure.” These include industrial and logistics warehouses in areas near the city’s two airports, the new city government compound in Tongzhou district, restaurants, antique stores, street-front shops and old residential buildings in certain downtown areas. Inspection teams will specifically target buildings and refurbished farm facilities that have been turned into rental homes and wholesale markets on the outskirts of Beijing.

Residents were evicted from some buildings on short notice ranging from two days to a week, leaving many in limbo, several tenants told Caixin.

[…] Many low-income, rural migrants said they were jittery because the government was vague over the types of residential builds that are being investigated. [Source]

At Radio Free Asia, Luisetta Mundie translates Chinese service reports which situate the crackdown into a series of policies that disenfranchise China’s many migrant workers:

The crackdown has made thousands homeless, according to official media reports.

But a resident of Daxing said fires of this kind are a regular occurrence in China.

“The … fire is being used as a trigger to remove these people from the city overnight,” the resident said. “China has always been this cruel; it’s being going on since 1949.”

[…] A journalist who asked to remain anonymous said the crackdown is a particularly harsh one amid many targeting migrant workers in more affluent Chinese cities.

“There have always been drives to get rid of migrants, but now it’s getting more intense,” the journalist said. “It’s getting that way across the whole of Beijing now.” [Source]

And the interventions against the inhumane treatment of migrant workers in Beijing in the aftermath of the dormitory fire. Like this petition initiated by Beida scholars to respect migrant workers as fellow human beings and provide relief. https://t.co/QwhXA2VOTt

The Global Times contrasts public outrage at a campaign that is affecting Beijing’s marginalized migrant population with official media coverage justifying the crackdown as a needed safety measure:

A front-page commentary on Friday’s Beijing Daily, the municipal Party committee’s mouthpiece, denies the city government is targeting its “low-end population,” in reference to migrant workers.

The evictions have sparked widespread criticism that migrant workers should not be blamed for the fire and that forced evictions in sub-zero temperatures are heartless.

However, the commentary, which stressed that “life and safety are always the red line of a city’s development,” claims the perception that the hazard removal campaign is aimed at “rejecting the low-end population” is a misunderstanding.

[…] The campaign has been widely criticized as targeting the so-called “low-end population,” mostly migrant workers living under shabby conditions, who are being hastily driven out of their apartments in sub-zero temperatures.

“I understand the rationale, but its implementation is rude and inconsiderate. It would be better to increase the number of government-subsidized rental houses to migrant workers than to drive them out,” a 35-year-old woman surnamed Huang, who came to work in Beijing from Central China’s Henan Province in 2002, told the Global Times on Friday. [Source]