On his blog, Evan Osnos interviews artist Xu Bing about his most recent work, “pair of steel phoenixes fashioned from abandoned construction materials, hoisted up on cranes in the center of Beijing”:

Where did the concept of the piece originate?

I went to a construction site and I was shocked. China has so many modern buildings, but you can’t imagine how poor the working conditions and primitive living situations were. I think there is a huge contrast. That was when I decided to use waste materials. I want to use the waste materials from the building construction to create a piece of work that hangs inside the building itself. I thought that could have meaning. Because this building was very extravagant. 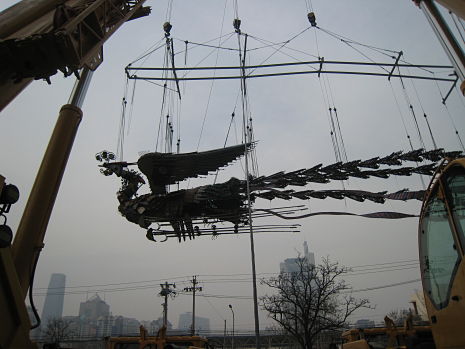 [Photo from the New Yorker]