Li Baozhu (李宝柱): Deleting Internet Posts with a Wave of His Hand 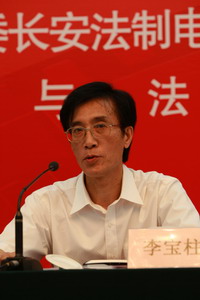 “With a wave of my hand, tens of millions of posts about the Deng Yujiao incident were all deleted.” (邓玉娇那事几千万个帖子，我一挥手就全部 删除。”

The quote above is from Director Li’s recent public lecture at Peking University, and has been one of the hottest micro-blog posts in Chinese cyberspace since yesterday.