Tank Cartoon Censored on Eve of Anniversary of Tiananmen Square

Days before the anniversary of China’s 1989 assault on pro-democracy protesters in Tiananmen Square, Chinese censors have forced one of the nation’s more outspoken newspapers to excise a cartoon that appears to refer to the crackdown. In a series of cartoons commemorating International Children’s Day, the newspaper, Southern Metropolis Daily, based in Guangdong Province, depicted a child drawing a line of tanks, a man standing before them. The cartoon seemed to evoke the most famous photograph of the Tiananmen protests, in which an unarmed man brought a column of Chinese tanks to a standstill by refusing to move from their path. Friday is the 21st anniversary of the Tiananmen Square crackdown. 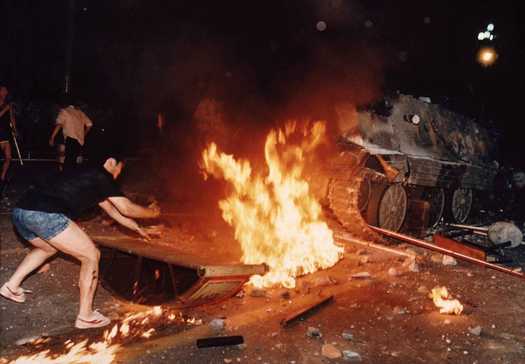 A student protester puts barricades in the path of an already burning armored personnel carrier that rammed through student lines during an army attack on anti-government demonstrators in Beijing’s Tiananmen Square, early June 4, 1989.
AP Photo/Jeff Widener

Update: See the cartoon in question at the Rue 89/Chinatown blog (thanks to Adam Cathcart for the link.)