As Beijing and other parts of eastern China were blanketed by continued record-breaking pollution, the official media has offered up a surprising amount of transparency. Pollution is often played down by official media, and the Chinese government has bristled at efforts by foreign governments to collect data on air quality at their embassies. But when readings on air quality indices went off the charts over the weekend, domestic media reports almost immediately began reporting on the extent of the problem, informing readers about the data used to measure air quality and discussing long-term solutions. From the New York Times:

The across-the-board coverage of Beijing’s brown, soupy air, which has been consistently rated “hazardous” or even worse by foreign and local monitors since last week, was the most open in recent memory. Since 2008, when Beijing made efforts to clean up the city before the Summer Olympics, the air has appeared to degrade in the view of many residents, though the official news media have often avoided addressing the problem.

The wide coverage on Monday appears to be in part a reaction to the conversation that has been unfolding on Chinese microblogs, where residents of northern China have been discussing the pollution nonstop in recent days.

The problem is so serious — the worst air quality since the United States Embassy began recording levels in 2008 — that hospitals reported on Monday a surge in patient admissions for respiratory problems. Beijing officials ordered government cars off the road to try to curb the pollution, which some people say has been exacerbated by a weather phenomenon, called an inversion, that is trapping dirty particles.

“I’ve never seen such broad Chinese media coverage of air pollution,” said Jeremy Goldkorn, a business consultant in Beijing who tracks the Chinese news media. “From People’s Daily to China Central Television, the story is being covered thoroughly, without trying to put a positive spin on it.”

One notable media report was an editorial in the Global Times, translated for their English edition, which called for transparency and public involvement in finding solutions to pollution:

On this issue, the government cannot afford to make decisions for the society. Previously, governments used to deal with the pollution information in a low-key way and made the choice between development and environmental protection for public. However, when public opinion didn’t go for this way of thinking, it led to some conflicts.

In future, the government should publish truthful environmental data to the public. Let society participate in the process of solving the problem.

The public should understand the importance of development as well as the critical need to safeguard the bottom line of the environmental pollution. The choice between development and environment protection should be made by genuinely democratic methods.

Currently, Chinese public opinion prefers sensational news. Against such condition, the governments cannot always think about how to intervene to “guide public opinion.” It should publish the facts and interests involved, and let the public itself produce a balance based on the foundation of diversification.

The government is not the only responsible party for environmental pollution. As long as the government changes its previous method of covering up the problems and instead publishes the facts, society will know who should be blamed.

The Wall Street Journal has more examples of reporting in the Chinese media:

“Everyone is the victim of polluted air, and everyone is capable of reducing the smoggy air,” said CCTV in the commentary. “Environment protection policies should be strengthened. Governmental departments should take the lead and drive official cars less frequently.”

Government officials were ordered to reduce vehicle use over the weekend, according to the state-run Xinhua news agency, which also covered the pollution story extensively.

On his blog, the New Yorker’s Evan Osnos writes about the shifting public consciousness on the issue:

The smog this weekend passed another threshold I hadn’t seen before: a test we might call “the local tolerance.” For years, Chinese people called their smog “fog,” a subtle way of saying, in effect, Western countries were polluted on their way up, too, so give us a break. Not anymore. The Chinese press was full of stories about smog this weekend, including a reminder of the hideous fact that high levels of particulate matter caused a combined eight thousand five hundred and seventy-two premature deaths in Beijing, Shanghai, Guangzhou, and Xi’an last year, according to estimates in a study by Greenpeace and Peking University’s School of Public Health.

Someday, I’ll write about the political effects of environmental pollution, about how, when the middle class in places like Hungary and Taiwan eventually got fed up with their ruling parties, one of the first issues around which they organized was the environment, because it was visceral and seemingly apolitical.

Despite recent efforts to alleviate the current cloud of pollution, Didi Kirsten Tatlow writes in the International Herald Tribune that the scale of China’s economic growth (which may be slowing down but is still formidable) means environmental problems are likely to persist:

The scale of the problem is, quite frankly, overwhelming. A very revealing chart by Edgar, the Emissions Database for Global Atmospheric Research, from the European Commission, estimates that in 2011 China produced 9.7 million kilotons of carbon dioxide, nearly double United States’ 5.42 million kilotons.

Indeed, were the Chinese cement industry a country, it would be the sixth biggest emitter of carbon dioxide in the world, producing 820,000 kilotons in 2011, slightly ahead of Germany’s total carbon dioxide emissions that year of 810,000 kilotons, according to Edgar. Germany was the sixth most polluting nation in the world, with the United States the second and China the first, according to the chart.

But something else stands out here: China’s population of more than 1.3 billion is about 4.5 times that of the United States’ approximately 300 million. So though it leads the world in carbon dioxide emissions, it is still, per capita, far less polluting than the United States.

Unfortunately, that may change. China’s economy may overtake the U.S. economy sometime within the next decade or two, meaning that we may be facing a truly astonishing problem. As Ma Jun, the director of the Chinese Institute of Public and Environmental Affairs told the Hong Kong-based South China Morning Post: “It is no secret that our way of development is not sustainable and the total pollution emissions in the region have far exceeded the maximum ecological capacity.”

Meanwhile, the economic and health impact from this week’s toxic cloud is already being felt. Airports have canceled flights, factories have been asked to slow production, and schools have reduced activities. A cardiologist at Peking University People’s Hospital told Bloomberg that the number of heart attacks seen at the hospital had doubled since Friday, when the pollution began to spike. Respiratory wards were overflowing over the weekend, according to the Financial Times.

The recent surge of polluted air is likely partially due to a recent cold snap, when residents burned more coal than usual to keep warm. Weather reports indicate that the extreme pollution may ease mid-week, as another cold front is expected to blow it away. By early Tuesday, the air already seemed clearer:

Hooray. Beijing air looking much better this am. twitter.com/niubi/status/2…

A photo from NASA shows the cloud of pollution over Beijing (which is within the blue circle): 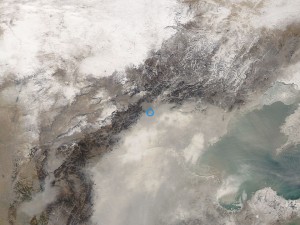