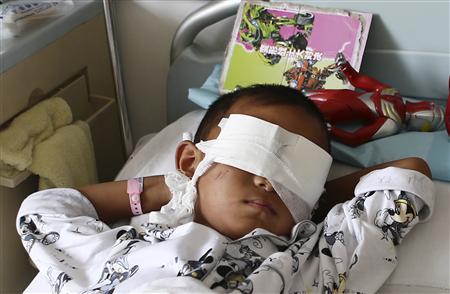 The Global Times reports on a reward offered for information about the 6-year-old boy whose eyes were gouged out in Shanxi province:

Local police in Linfen, Shanxi Province, on Tuesday offered a 100,000 yuan ($16,335) reward for information leading to the arrest of a female suspect involved in a case that saw the eyeballs of a 6-year-old boy ripped out.

Local police told the Global Times Tuesday that the case is still under investigation.
The boy was unconscious when he was found in a field not far from his home late on Saturday night. The police found his eyeballs at the scene, however, the corneas were gone.

For the South China Morning Post, Jeremy Blum and AFP have more details on the case, noting that early reports claiming his corneas were missing have since been denied:

“He had blood all over his face. His eyelids were turned inside out. And inside, his eyeballs were not there,” his devastated father told Shanxi Television reporters.

The child’s eyes were found nearby but the corneas were missing, early reports said, implying that an organ trafficker may have been behind the harrowing attack.

New details revealed by Shanxi authorities have said that these missing cornea reports are incorrect, however, potentially ruling out the possibility of organ traffickers. [Source]

The case has become the most widely searched for term on China’s Twitter-like Sina Weibo microblogging service, with people calling for swift justice to be meted out.

“What kind of terrible person could do this? Let’s unite together to find the criminal,” wrote one Weibo user. [Source]

A tweet from Offbeat China translates the 6-year-old’s chilling words to his mother in the hospital:

Taiyuan boy who got eyes gouged out after being kidnapped: “Mom, why it’s always dark?” – http://t.co/vhbTfQEBzf

In China, severe shortage has led to a thriving black market in transplantable organs. While the fraction of demand met has long relied on post-mortem death-row inmates, China’s Ministry of Health has promised that a volunteer-based donation system is soon to go into effect. In related news, the South China Morning Post recently reported a crackdown on an illegal kidney harvesting ring in Wuhan:

Authorities have cracked down on an illegal kidney harvesting operation in Hubei province’s Wuhan, shedding light on the horrific practices of underground organ traffickers.

Authorities from the Wuhan Public Security Bureau arrested more than 10 members of a kidney trafficking group on August 17, Chutian Metropolis Daily reported in a feature story. The group consisted of various personnel, including a professional medical team with a surgeon, two nurses and an anaesthetist. These traffickers had been carrying out both kidney removals and transplant operations in a nondescript villa in the Jiangxia district of Wuhan.

Police said it was rare to see a trafficking group carrying out kidney transplant operations, which require more medical expertise than the standard removal processes which most black market gangs specialise in. [Source]