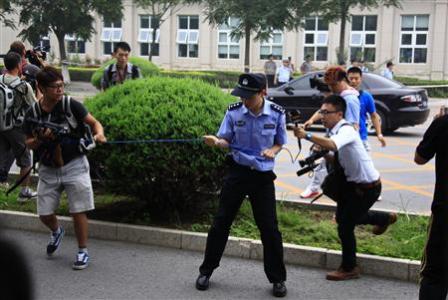 Liu Hui, brother-in-law of jailed Nobel laureate Liu Xiaobo, has lost his appeal against an 11-year prison sentence for fraud. Supporters see his case as part of a pattern of retribution against activists’ families, which U.S. officials recently identified as a particularly “worrisome trend” amid a general deterioration of human rights in China. From Sui-Lee Wee at Reuters:

Liu Tong, Liu Hui’s brother, told reporters he was furious at the verdict.

See coverage of the two visits to Liu Xia via CDT. In June, Liu Xia wrote an open letter to Xi Jinping about her brother’s case, and announced plans to sue Beijing police for her illegal house arrest and to petition for her husband’s case to be reopened. She was not present at Friday’s hearing, reportedly due to her “very fragile” health. Authorities may have meant to avoid a repeat of her appearance at Liu Hui’s trial in April, however, her first time in public in over two years. Despite police efforts to isolate her from the assembled reporters and foreign diplomats, she managed to shout “tell everybody I’m not free! I love you … I miss you” before being taken away.