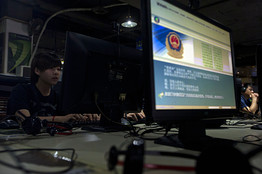 The attack began at 2 a.m. Sunday morning and was followed by a more intense attack at 4 a.m., according to the China Internet Network Information Center, which apologized to affected users in its statement [zh] and said it is working to improve its “service capabilities.”

The attack, which was aimed at the registry that allows users to access sites with the extension “.cn,” likely shut down the registry for about two to four hours, according to CloudFlare, a company that provides Web performance and security services for more than a million websites. Though the registry was down, many service providers store a record of parts of the registry for a set period of time, meaning that the outage only affected a portion of websites for some users.

Denial-of-service attacks cause disruptions by overwhelming a computer or network with a high level of online activity. Usually the attacks originate from networks of computers that have been hijacked by malware or viruses.

By Monday the problem seemed to have been solved, with Chinese Internet users able to access websites such as Sina Corp.’s social networking site Weibo smoothly. [Source]

CNet has more on the CNNIC statement and who could be responsible for the attack:

In a statement on the matter, the government-run China Internet Network Information Center confirmed the attack, saying that it was indeed the largest the country has experienced. The center said it is gradually restoring services and will work to improve the top-level domain’s security to safeguard against similar attacks.

It’s not currently known who attacked the Chinese domain. However, in a statement on the matter, CloudFlare CEO Matthew Prince said that while it’s possible a sophisticated group of hackers took .cn down, “it may have well been a single individual.” [Source]