The Plight of China’s Petitioners 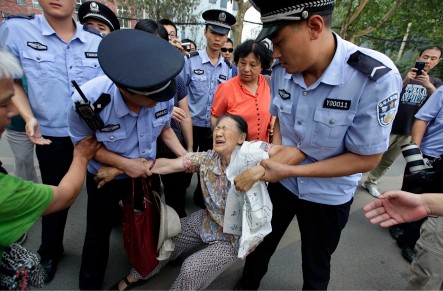 At The Diplomat, Tyler Roney describes China’s petitioning system and its unofficial alternatives, including appeals to the foreign and domestic media that fuel an underground trade in reporters’ contact information and led some petitioners to try to edge into the spotlight on the trial of Bo Xilai last week.

“If I get detained outside the UN, the local courts will finally meet with me,” says Wang. When it comes to petitioning, media attention is the Holy Grail. Consequentially, Wang and others often petition in front of the United Nations Development Program (UNDP) building, hoping for a shot at the limelight. Within seconds, petitioners mob reporters.

[…] Wen Tao, a Chinese journalist who spent months in detainment for his association and friendship with controversial artist Ai Weiwei, has had run-ins with petitioners in the past. Four years ago, while working for the Global Times, Wen Tao was pushed around in front of the Bureau of Letters and Visits in Beijing.

“It’s a very normal situation in China when you cover stories like that, petitioners,” Wen Tao says. “This is a sensitive field; they (Chinese journalists) can only report sometimes.”

[…] Without a free local or national press or an independent judiciary, the foreign press—which in many cases lacks access—is the last resort in a long line of last resorts. Faith, for most petitioners, still lies with the central government. Many even prefer it to legislative channels. When asked if she thought there was anything the central government could be doing better, Wang Lanying said, “They just can’t see us.” [Source]

See more on some of the topics Roney mentions, including Beijing airport bomber Ji Zhongxing, the Chinese invasion of the White House’s online petition site, and the shaky debut of China’s own online petitioning platform, via CDT. See also Yu Jianrong on the flaws of China’s petitioning system, The Economist on Beijing’s official detention centers and unofficial black jails, and perspectives from the men charged with intercepting petitioners from Economic Observer and Caixin, also via CDT.