Violence Against Doctors on the Rise in China 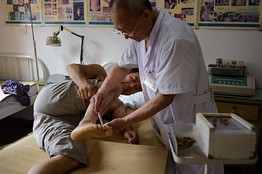 The Wall Street Journal reports on the rising number of incidents of violence in Chinese hospitals, a reflection of the popular distrust of Chinese medical staff which itself reflects systemic issues in China’s health care system:

Violence against China’s medical personnel is on the rise, underscoring problems plaguing the country’s health-care system.

The average number of assaults on doctors increased to 27.3 per hospital in 2012, up from 20.6 in 2008, according to a Xinhua report released late Thursday, citing a survey from the Chinese Hospital Association.

[…]Doctors, considered civil servants in China, are paid low wages that amount to no more than the salary of a waiter—about 3,000 yuan ($490) a month. In a 2011 survey of 6,000 doctors by the Chinese Medical Doctor Association, 95% said they were underpaid and 78% said they wouldn’t want their children to study medicine.

[…]Nearly 40% of medical personnel surveyed at 316 hospitals nationwide from December 2012 to July 2013 said they plan to give up their profession due to increased violence in hospitals, the Xinhua report said. It did not specify a timeframe for planned departure.

Also see “Chinese Delighted by Hospital Violence?” CDT’s coverage of the intern who was killed last year by a disgruntled patient in Heilongjiang province, or all prior CDT coverage of health care in China.