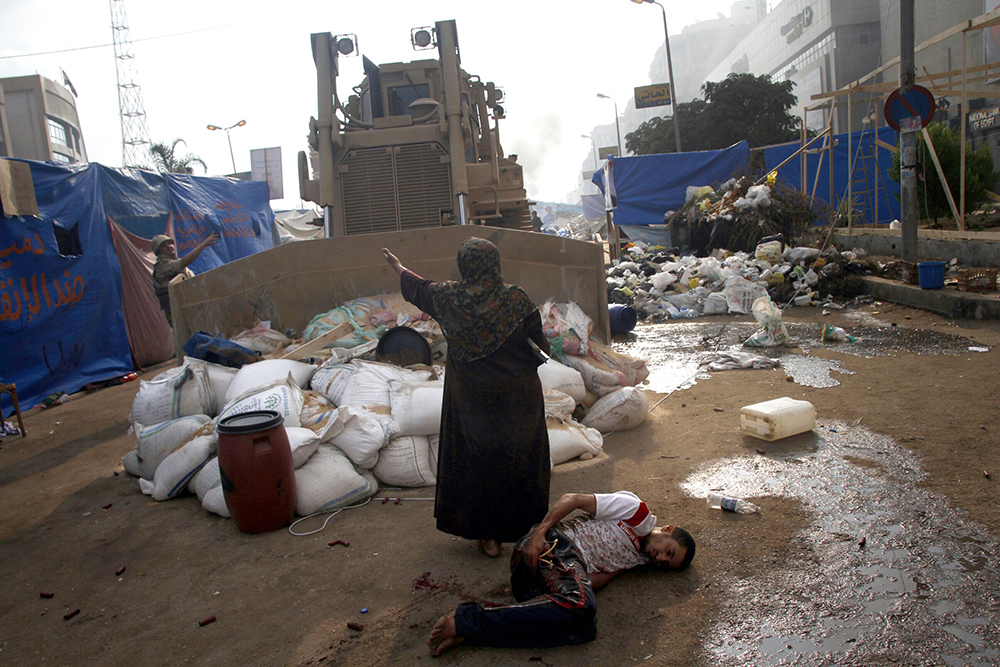 After the violent crackdown on supporters of ousted president Mohammed Morsi by Egypt’s military-led interim government resulted in over 500 deaths and many more injuries in Cairo yesterday, the death toll continues to climb today. Some commentators have chosen to draw parallels to the military crackdown on pro-democracy demonstrators in Beijing between June 3-4, 1989. Yesterday, The Guardian posted an article titled “Military Crackdown: Egypt’s Tiananmen Square”. Marc Champion noted similarities (and differences) between the two crackdowns in a post for Bloomberg’s The View. In a podcast for The Progressive, editor Matthew Rothschild said “we haven’t seen this kind of government-led slaughter since Tiananmen Square.” Others, such as The Times of London’s Roger Boyes and the Washington Post’s Anup Kaphle used Twitter to make the comparison:

Using Kaphle’s comment to exemplify the many similar tweets being posted, Sam Crane weighed in. After first pointing out that the total number of deaths in Beijing remain ambiguous, he continues to explain major differences in the political situations of Egypt in 2013 and China in 1989. From his Useless Tree blog, he urges restraint in making comparisons:

Institutionally, the two places are vastly different. Civil society in China is nowhere near as organized as in Egypt; there is nothing like the Muslim Brotherhood, which was able to maintain a strong political network through years of repression and then rise during the breakdown of the Mubarak regime to become an electoral force, only to, again, be violently repressed. The CCP is much more effectlively proactive when in comes to keeping dissidents from developing significant organizational networks.  Conversely, there is nothing like the CCP in Egypt.  Mubarak obviously relied on the military for support, as does the CCP, but he had nowhere near the political structure that the Communist Party gives to China’s leaders.  And Egypt now is institutionally disintegrating before our very eyes. The earlier regime change opened the political system to much more participation and mobilization than the institutional capacities of the state could handle […]

[…]So, let’s be careful with the comparisons (even if only in headlines). Egypt and China are two very different places. Nor should we rush to conclusions about what the violence in Cairo might mean for political change in other parts of the world.  Transitions from authoritarianism are often unstable and they sometimes fail.  There is nothing inevitable in processes of political transformation: they are driven by actors responding to particular immediate circumstances with varying strategic calculations. Thus, violence in Cairo today does not mean that political change in China is unwise or impossible. […] [Source]

Another noted parallel deals with a potentially resounding picture. Just as the photo of “Tank Man,” the anonymous protestor who stared down a row of armored vehicles on the morning of June 5, 1989, continues to be a sensitive symbol of government force, yesterday’s crackdown also produced an iconic photograph: the image of a woman standing above an injured protestor as she tried to halt a bulldozer.

Some Chinese web-users were also reminded of 1989 when reading recent news out of Cairo, while others saw the ongoing unrest in Egypt as proof that democracy isn’t the answer. Offbeat China surveys netizen reactions from China:

One netizen 倩烨归来 commented: “In an article on Egypt in the Financial Times, a journalist wrote down what a dying protester said to him: ‘He told me they were being shot at from a plane. They take our planes and our money and use them to shoot us. ‘ When I read that sentence, I couldn’t help but feel that it actually described China.” Another netizen 总是隔夜醉 commented: “Crackdown. How familiar. Freedom. How unfamiliar.”

[…S]ome netizens saw the current chaos in Egypt as a result of a blind promotion Western-style democracy. The rhetoric that Western-style democracy doesn’t work in China given China’s unique history and culture has been the official argument against more radical reform by the Chinese government for years. Now seeing what has happened in Egypt after the Arabic Spring, many seem to be finally convinced.

The New Yorker’s Peter Hessler, who has reported for the magazine from both China and Egypt, relayed one Egyptian’s stance on democracy after the military coup that ousted President Morsi in July:

[…]”I voted for Morsi, and I prayed for him, but he failed. I’m against what happened. We should have kept him as an honorary figure. We could have given the power to the Army and others, but left Morsi as the President in name.”

I asked him if he believed that the coup had been a mistake. “No,” he said. “He failed. I won’t vote for them again. I don’t want democracy.” He continued, “Does China have democracy? How is its economy doing? I don’t care about democracy and freedom.” [Source]

China follows closely the situation in Egypt and is deeply worried about the developments. China urges parties concerned in Egypt to bear in mind the interests of the country and people, exercise maximum restraint to avoid further casualties and dissolve differences through dialogue and consultation to restore order and social stability. [Source]

A post from The Diplomat examines the lack of clarity in China’s official statement:

This rather vague and ambiguous statement is typical of Chinese diplomacy. Yet it also reflects the reality that there are many “contradictions” in China’s views of the military crackdown in Egypt, and its broader interests in the Arab country more generally.

Perhaps more than anything, China’s views on the military crackdown itself is full of contradictions. On the one hand, China has little interest in criticizing Egypt given its long-standing policy of not intervening in the internal affairs of other states. Additionally, China does not want to come out too harshly against a military crackdown given the ever-looming possibility that it may one day have to (again) deploy the People’s Armed Police and/or Liberation Army to put down similar, large-scale unrest in China.

[…]These concerns about not criticizing a military crackdown appear to have won out given the Foreign Ministry’s statement about protecting the interests of the country and the people in that order.

Still, China has other reasons to only offer only tepid support to the Egyptian military’s actions.[…] [Source]