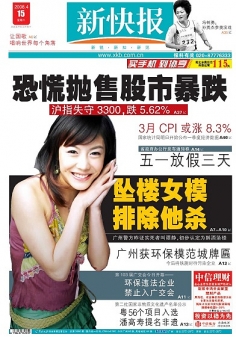 Police detained Chongqing-based New Express reporter Liu Hu on Friday after he openly alleged that senior official Ma Zhengqi was involved in “serious misconduct when he worked in Chongqing.” From Global Times:

According to Qing Ling, the wife of Liu Hu, “nearly 10” police went to their home at noon on Friday and took Liu away after he signed a paper. Police also took Liu’s computers and laptops as well as several bank cards which had been canceled by the bank.

“Police didn’t say why Liu was taken away and I have not yet been able to contact him,” Qing told the Global Times, adding that Liu was in handcuffs when he was taken away.

[…] A police officer from the police station in charge of Liu’s community confirmed with the Global Times that one of the police from their station went to Liu’s home on Friday to assist police from Beijing. [Source]

Liu posted a weibo report in July in which he urged authorities to investigate Ma, the deputy director of the State Administration for Industry and Commerce, for dereliction of duty. From South China Morning Post:

Ma was transferred to Beijing serving as a deputy SAIC director from April this year amid a damaging sex tape scandal implicating more than a dozen district and major state-owned company officials in Chongqing.

In a microblog entry dated on July 29, Liu wrote about how Ma failed in his oversight of the restructuring of the state-run company during his tenure as the former party secretary of Wanzhou district between 2002 and 2007, which led to the loss of millions of yuan in state assets.

Liu later deleted that entry but said he stood by his allegations. [Source]