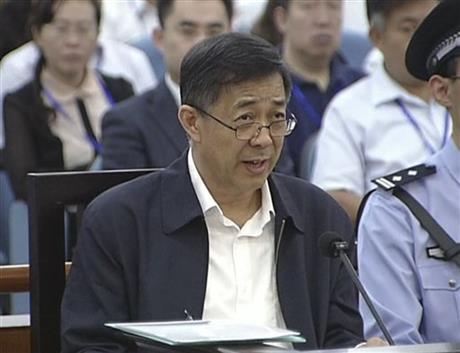 The Jinan Intermediate People’s Court has announced that a verdict in the case against disgraced Chongqing Party chief Bo Xilai will be delivered Sunday at 10 am. In preparation for the announcement, the Central Propaganda Department issued restrictions on reporting the case, which include, “Do not speculate on any aspect of the case.” But that is not stopping the foreign media from speculating over how harsh his sentence will be. Reuters reports that a length prison term is likely:

Senior party figures fear Bo could stage a political comeback one day if he is not dealt a harsh sentence, sources told Reuters after the trial.

A light sentence could undermine President Xi Jinping’s pledge to go after corrupt political heavyweights as harshly as those lower down the pecking order. [Source]

Although it is has been widely believed the former Chongqing party secretary will receive a relatively lenient sentence, the fact he showed scant remorse in court could land him a much harsher sentence – up to life imprisonment. The maximum punishment for his crimes is the death penalty.

[…] Pundits generally believe the Communist Party wants to put its biggest political scandal in decades behind it before moving on to discuss economic reform at a meeting of its Central Committee in November. It is unclear whether the party will press charges against another political heavyweight, Zhou Yongkang, a former Politburo Standing Committee member and Bo’s ally, despite corruption probes centred on him. [Source]

In the hours leading up to the announcements, foreign journalists and China watchers took to Twitter to announce their predictions:

@gadyepstein @MalcolmMoore How about suspended death plus forced conjugal visits from Gu Kailai?

@stinson @gadyepstein @MalcolmMoore I'm thinking no suspended death sentence: would be unprecedented (I believe) for a PB member. 25 years.

@UselessTree @mattschiavenza Unless I'm mistaken, 20 yrs is longest fixed-term sentence. Beyond that you have life, suspended death, death.

@gadyepstein in that case: 20. And a stern talking to.

If you are interested in joining in, a Google survey is collecting predictions of Bo’s sentence.

No matter the length of his sentence, it is likely that Bo will be detained in Qincheng Prison, on the outskirts of Beijing, where convicted senior government officials usually serve time. Bo’s father, Bo Yibo, a senior Communist Party leader, spent more than ten years in Qincheng during the Cultural Revolution. From the BBC:

Qincheng prison was built on the northern hills of Beijing in 1958. Using Soviet funding, the prison was originally constructed to house Chinese nationalists who ran afoul of Mao’s communist conquerors.

Today, Qincheng remains China’s only “luxury” prison, housing political prisoners who are treated like ordinary inmates, and high-ranking party officials, who enjoy a series of perks.

Qincheng’s elite prisoners can watch television between 14:00 and 21:00 and can walk the prison grounds alone up to six times per week, according to a recent article in the Beijing News, a reputable daily newspaper.

Instead of wearing the prison’s usual black uniforms, former officials are permitted to wear clothing provided by their families, the newspaper added. [Source]