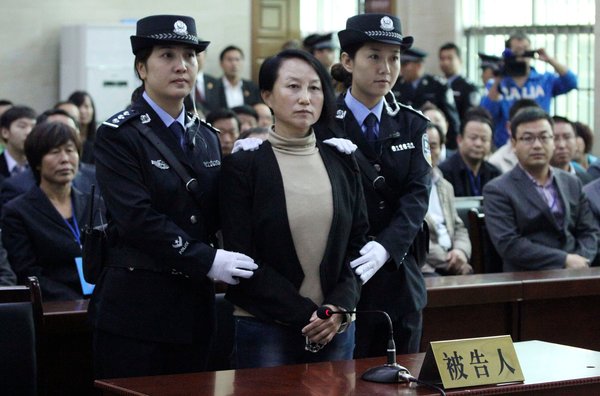 Banker and real estate entrepreneur Gong Aiai has been sentenced to three years in prison for committing forgery and falsifying documents. Gong, who is known online as “Older House Sister,” acquired high-end properties worth a total of US$160 million by using multiple ID cards. Her case inspired public outrage after it was exposed online. From the New York Times:

After her exposure earlier this year by online whistle-blowers, Ms. Gong and her voracious appetite for real estate became a lightning rod for the frustrations of poor and middle-class Chinese who have been priced out of the nation’s booming property market. To many detractors, her case also provided further evidence of how government officials and executives at state-owned enterprises can use their positions to grow unimaginably rich.

Ms. Gong, a former vice president of the Shenmu Rural Commercial Bank, was accused of accumulating 41 apartments in Beijing and several others closer to home by presenting illicitly obtained national identity cards and hukou, the coveted residency permits required when buying residential property. Prosecutors say her real estate portfolio was worth $160 million. [Source]

South China Morning Post has more on the case:

The case against Gong attracted nationwide attention as police evidence showed that Gong, 49, owned more than 40 properties, including 26 shops, seven offices, seven flats and one villa in Beijing with a total contract price of 395 million yuan (HK$498 million) under four identities.

Under the law, each mainland resident is allowed only one ID. Gong’s extra IDs have been revoked .

Gong denied the charges in her trial last Tuesday, arguing that she did not know it was illegal to have more than one ID. It is not known whether Gong will appeal. [Source]

While Gong was given the moniker “Older House Sister,” the alleged perpetrator in a similar case became known as “Younger House Sister.” In January, the Central Propaganda Department issued a directive limiting reporting on Gong’s case.