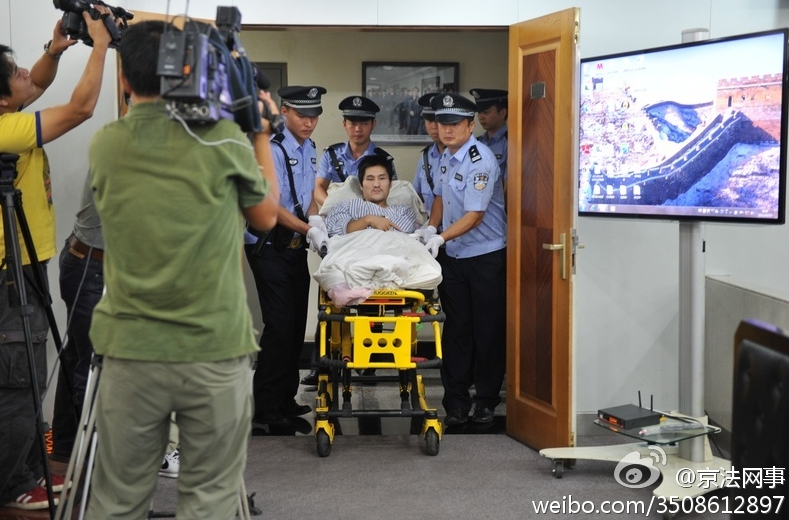 Ji Zhongxing, who set off a homemade explosive device at Beijing Capital International Airport in July, appeared in court on a stretcher on Tuesday charged with endangering public security. Ji had spent years seeking compensation for a beating by chengguan urban management staff that he says left him unable to walk. Authorities promised to reopen his case following a wave of public sympathy after the explosion, which a remorseful Ji claimed in court had been an accident. From Brian Spegele at China Real Time:

The proceedings, which lasted roughly 2 ½ hours, concluded with Mr. Ji voicing regret over his act, and asking the court for a second chance, according to a description of the trial posted to the official Sina Weibo account of the Beijing courts.

Mr. Ji’s lawyer, Liu Xiaoyuan, said he had put in an innocent plea for his client at the trial, as he believed the explosion had been unintentional.

[…] His case shone a light on the frustrations encountered by many petitioners as they meander through China’s courts and its byzantine petitioning system. Many of those who allege abuses by local authorities travel to Beijing where they attempt—often unsuccessfully—to win central authorities’ attention for their plight. This phenomenon has in turn given rise to informal detention centers known commonly as “black jails,” where petitioners are held before being returned from Beijing to their home districts. [Source]

Ji Zhongji, Ji’s elder brother, said after attending the trial he had not seen his brother in months. “He is very thin, and I am deeply concerned about his health,” he said.

[…] Airports have become a hot spot for petitioners following the incident. A day after the blast, a Guangdong man was detained at the same airport for handing out pamphlets. On Saturday, an elderly woman from Hunan was detained, also at Beijing Capital, for setting off firecrackers. An elderly man was held over the same thing yesterday at an airport in Wuhan in Hubei.

Prosecutors said the blast, whether intentional or not, had threatened public safety. [Source]

Among other subsequent explosions and bomb threats, singer Wu Hongfei was detained for over ten days after jokingly threatening to blow up local government buildings on Weibo.