A Timeline Of Toppled Party Leaders 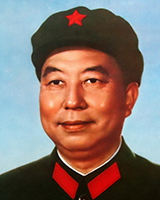 ChinaFile has created an interactive timeline that features China’s toppled leaders sorted by rank in the Communist Party:

Political infighting and purges have been hallmarks of the Chinese Communist Party since its earliest days but came to a peak during Mao Zedong’s Cultural Revolution, damaging the country and paralyzing the Party itself. When Mao died in 1976, it was agreed by Party survivors that the constant and ruthless upheaval must end.

But the struggles continued, albeit at a slower pace and in a less radical fashion. The timeline below gathers the details of the toppling of the Party’s highest-level leaders from the time of Mao’s death to the trial, in August 2013, of Bo Xilai—the fallen Chongqing Party Secretary whose sentencing for corruption, bribery, and abuse of power is expected to be delivered on September 22.

Because the number of lower-level Party officials ousted during that time is too great, our timeline includes only members of the Politburo, the nation’s most powerful political body—the one that controls the Party, the People’s Liberation Army (P.L.A.), and the government.[Source]