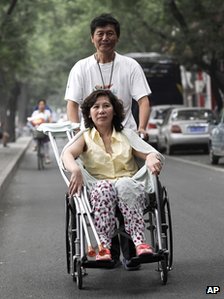 Land rights activist Ni Yulan has been released from prison after serving a two and a half year sentence. Her original sentence of 32 months for “disturbing public order” and “fraud” was reduced by two months when the latter conviction was dismissed on appeal. Ni was arrested with her husband after working to defend people who were forcibly evicted from their homes. Ni is in a wheelchair from injuries sustained during police beatings in earlier cases. In 2008, her own house was demolished by Beijing authorities. From the BBC:

She said her illness had not been treated during her detention and she was now in poor health.

But the 54 year old insists she will fight on, and threatened to sue police and seek redress.

“If we don’t fight for rights, we will just have to wait for our death,” she told Reuters news agency.

“I want them to return my assets. They’ve torn down my home without giving any compensation, leaving us homeless.” [Source]

The South China Morning Post has more on her plans to sue over her and her husband’s 2010 detention in what she called a “black jail”:

Authorities forced Ni, who is wheelchair-bound, and her husband, Dong Jiqin, to stay at a hotel in 2010 after their home was demolished in 2008. Ni had previously called it a “black jail” — an informal detention site such as a hotel or government guesthouse used to hold protesters and petitioners without resorting to legal procedures.

During her trial, prosecutors alleged that Ni had “willfully occupied” the room that she was staying in.

Ni said she now plans to sue the Beijing public security bureau in the Xicheng district for holding her and her husband in the hotel and cutting off the water and electricity. [Source]