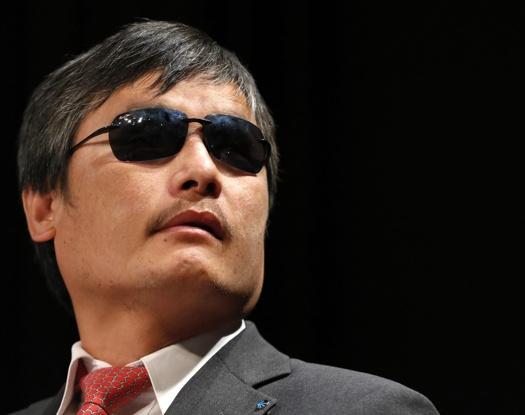 Exiled activist Chen Guangcheng has announced that he will become a fellow at the Witherspoon Institute in Princeton, NJ, a think tank which focuses on conservative causes, including opposition to gay marriage and abortion. From Reuters:

Chen will become a distinguished fellow in human rights at Witherspoon, which is based in Princeton, New Jersey, for the next three years. He will also be affiliated with The Catholic University of America and the more liberal-leaning Lantos Foundation for Human Rights & Justice, Luis Tellez, Witherspoon’s president, said in a telephone interview.

[…] Witherspoon, which Tellez says is guided by Catholic principles, is best known for its articles and studies opposing abortion, stem-cell research and same-sex marriage.

[…] He said Chen, who is not a Christian, would not be expected to espouse or even share Witherspoon’s views on social issues.

“I do not know Mr. Chen’s views on same-sex marriage,” Tellez said. “I never asked him. I don’t intend to ask him.” [Source]

Before arriving in the U.S., Chen, who is blind, was an advocate for victims of civil rights abuses in China, including forced abortions. Earlier this year, Chen left New York University, which had hosted him after he fled illegal house arrest, under a cloud of controversy and amid allegations that his agenda was being manipulated by influential members of the religious right.

Back in China, Chen’s relatives in his hometown of Linyi, Shandong, have been continually targeted by local authorities. Last week, Chen spoke to reporters about his family’s situation. From the South China Morning Post:

The 41-year-old rights activist cited the prominent case of his nephew Chen Kegui, 33, who had been detained and “tortured” before being sentenced to three years and three months in prison without any access to a lawyer.

Chen Guangcheng, meanwhile, said other members of his family, including a four-year-old nephew, were subjected to surveillance and harassment on a regular basis.

He said his elder brother was physically attacked and had the tires of his car slashed. Local authorities paid a gang of thugs to wreck the garden of the family home, hurling stones, bottles and dead animals into the property, he added. [Source]