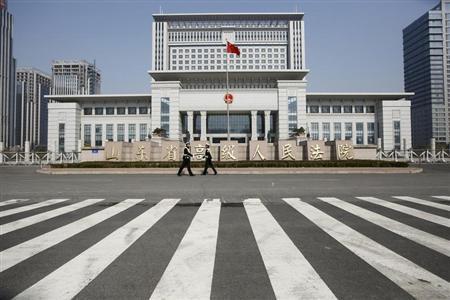 At Human Rights Watch, Carl Minzner charts how the judicial reforms of the 1980s and 90s stalled and gave way to short-term and often counterproductive stability maintenance:

[…] Citizens themselves are increasingly driven to rely on alternative channels to uphold their rights. When farmers aggrieved by land seizures see the court doors closed to their complaints, they learn that formal legal institutions can offer little help. When legal activists see state authorities stifle the evolution of mechanisms for interpreting constitutional norms, they lose hope in gradual reform.

Further, many Chinese citizens believe that state sensitivity to the threat of organized social discontent offers them an alternative lever to press for redress of their grievances. Precisely because local officials face stiff career sanctions for outbreaks of petitions and protests, discontented citizens often view these as a preferred mechanism to get what they want – regardless of the underlying legitimacy of their demands. Migrant workers may believe that encircling the county Party headquarters with a sit-down protest will prompt local authorities to intervene in their dispute with the employer who has illegally failed to pay their back wages. Farmers dissatisfied by state seizures of their land for highway construction projects may believe that organizing large numbers of villagers to engage in a heated confrontation with local police (and inviting journalists to cover the proceedings) will prompt local authorities to offer them monetary compensation well in excess of what they are legally entitled to receive.

This is dangerous. It is not a recipe for stable institutional evolution. Rather, both local authorities and ordinary citizens are being driven to extremes. And the very legal norms and structures that state authorities themselves constructed as a response to the chaos of the Maoist era are steadily being eroded. [Source]

What, then, is the next step? As the 3rd plenum of CCP Central Committee looms, the Supreme People’s Court issued a report urging greater judicial independence. From Megha Rajagopalan and Ben Blanchard at Reuters:

“Resolutely implement the courts’ independent exercise of judicial authority based on constitutional principles, and resolutely resist all forms of local and departmental protectionism,” the judicial document said in a long list of recommendations.

Local protectionism refers to municipal officials exercising political influence over verdicts – a pervasive problem in China, where rule of law and independence of the judiciary are given lip service only and courts must answer to party authorities.

The document also called for making trials more efficient, greater protections for lawyers, and “open justice” through microblogs and other new technologies. [Source]

Read more on the Third Plenum and prospects for reform via CDT.